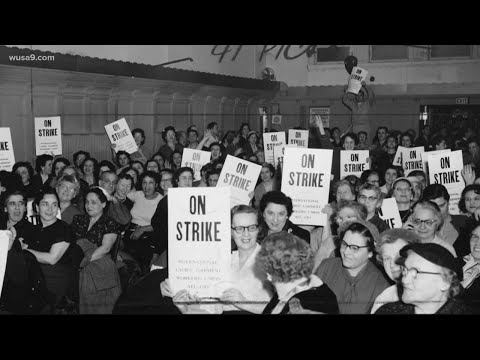 Labor Day is about more than a cookout.
(Image by YouTube, Channel: WUSA9)   Details   DMCA
Today's a federal holiday because on the eve of the 20th century, machinists, carpenters, and people who worked in mills, mines, factories, and more joined together to fight for better wages, better conditions, and a day to honor the power of working people.

This public health and economic crisis has shone a light on all of the cracks in our economic system all of the traps that make it so hard for working people, especially people of color, to even get a toehold in the middle class. And those traps aren't there by accident. The rich and powerful have done everything they can to take power away from workers including trying to break the backs of unions.

Throughout history, workers have gotten together and gotten organized. Thanks to the labor movement, kids went from working in factories to going to school. Americans went from working 12 hours a day, six days a week, to the 40-hour week we know now.

We must remember that when working people fight, working people win. Shoulder to shoulder, we're going to create an economy that works for everyone. That starts with electing Democrats up and down the ballot this November and it continues with fighting for big, structural change in January and beyond.


Thanks for being a part of this, and happy Labor Day.

Related Topic(s): Democrats; Labor Day; Work, Add Tags
Add to My Group(s)
Go To Commenting
The views expressed herein are the sole responsibility of the author and do not necessarily reflect those of this website or its editors.