I'm republishing this after talking with my 25 year old son, who, after watching the first Democratic debate, told me that Hillary sounds like a Republican with her positions on issues. One could also say she's a bank whisperer, a corporatist whisperer. 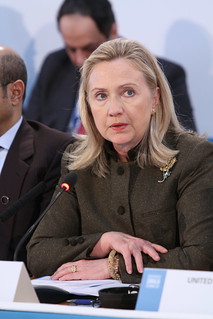 Hillary Rodham Clinton
(Image by Foreign and Commonwealth Office)   Details   DMCA
Hillary just gave a speech that looks like a clone from Bernie Sanders. But she's throwing in neoliberal code language, reassuring her real backers-- finance and bank people. Here's an excerpt from her speech at the New School (the whole speech is transcribed at Dailykos.com)

""So today I am proposing an agenda to raise incomes for hard-working Americans. An agenda for strong growth, fair growth, and long-term growth.

"Let me begin with strong growth.

"More growth means more jobs and more new businesses. More jobs give people choices about where to work. And employers have to offer higher wages and better benefits in order to compete with each other to hire new workers and keep the productive ones. That's why economists tell us that getting closer to full employment is crucial for raising incomes."

Growth. Then more growth. Growth is how to help American workers. Strong growth. That's how more people will get better paying jobs.
The problem with the kind of capitalism we live with now-- predatory capitalism, disaster capitalism, as Naomi Klein calls it, capitalism that strip-mines the commons, the 99%-- whatever the name, this kind of capitalism is built on growth. That growth doesn't happen for the sake of jobs. The growth is for corporate profits. The growth is for increased market share. The growth is so the corporation can invest profits in share buy-backs, rather than research or sharing with employees.
Growth is the code-word Hillary uses to tell her banker backers to ignore the progressive, take care of main street message she is putting out, that she's really sticking with the bankers, sticking to sticking it to we the people.
Growth is not the answer. Growth as an economic philosophy is, beyond over-rated. In recent years, growth has not helped workers. Growth has helped robot and automation and software manufacturers and developers. Growth helps finance companies taking businesses public and lawyers who make millions shepherding mergers and acquisitions.
Growth is part of the gospel of twenty first century capitalism. But it will be a part of the eulogy too, because unlimited growth is unsustainable. We need to start thinking about economics from the bottom-up, with a connection consciousness-- an awareness that we are all connected to all things-- all people to each other and to all of the earth's ecosystems.
In nature, there is no unlimited growth. Genes regulate growth, setting limits. And if growth goes too far, other bio-system elements kick and say no, no no-- bones break, kidneys fail to function, hearts become over-worked. Blood chemistry goes out of whack.
Growth in an economy is no different. The problem is, most economists are blind, miserable failures when it comes to including all the key factors-- including externality costs, like environmental pollution, social factors and exploitation of commons resources.

Related Topic(s): Big Vs Small; Economic Growth; Neoliberalism, Add Tags
Add to My Group(s)
Go To Commenting
The views expressed herein are the sole responsibility of the author and do not necessarily reflect those of this website or its editors.