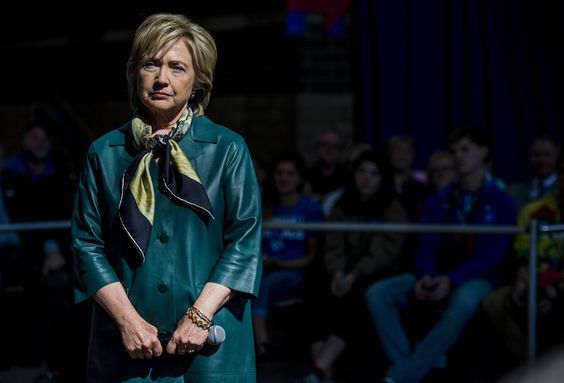 I can't say that I personally dislike Hillary Clinton because I've never met her. But I've been following politics for a long time and I've found Hillary to be" a piece of work. It is traditional for the nominee from an entrenched administration to become the candidate de jour in the next election. Hillary battled Barack Obama and lost. She made a deal with Obama and joined forces. He would be the President and Hillary would be the Secretary of State. Okay, no problem that deal worked and when the 2016 election rolled around, she was the power to beat. Only there is one problem. Being the presumptive nominee isn't a given, it's only a leg up.

She had eight years to groom party functionaries and to network with big time donors and she did that. She had the chairman of the Party in her back pocket! There was only one special interest group she forgot to woo"the American people. Think fast, what was the Clinton campaign's overriding concern for America? Bernie Sanders was running on fifteen dollar minimum wage. Hillary's response was eleven dollars an hour. The Democratic Party is supposed to be the Party of working people, and she couldn't even pretend to go along with a policy Americans were hurting for? As a multi-millionaire herself she saw a fifteen dollar an hour minimum wage as a threat to her stock portfolio.

In 2016, I was living in Parkman, Ohio. A one-horse town with one traffic light and no horse. Parkman is located about twenty miles from Warren, Ohio. Warren was a once a prosperous steel town devastated by the exodus of capital overseas. If you've never seen Warren you should, it looks like a war-torn Beirut. Steel mills abandoned, factories empty, stores closed with neighborhoods devastated by poverty and drugs. Hillary chose to come to Warren in 2016 and when I heard she was coming I made plans to go and see her. Finally, I thought someone was going to stand up and call out the forces which had devastated Warren but no, that wasn't the case.

The campaign had rented the last operating steel mill in Warren to hold a campaign rally. If you worked at the steel mill you had to fill out a form requesting permission to attend. Compare that with John Kennedy standing at a factory gate at six in the morning shaking hands with workers clocking in. Compare that with Harry Truman traveling 31,000 miles and giving 352 speeches from the back of a railroad car. Hillary's steel mill rally was closed to the public and none were invited. A busload of actors and functionaries filmed a rally scripted and produced as tightly as an episode of "Friends."

While living in Alabama I heard Hillary commemorate Bloody Sunday at Brown AME Baptist Church in Selma, Alabama. Her speech was peppered with "We's" and "Ya'lls." That's right, this woman who grew up on the affluent North Shore of Chicago and attended an Ivy league university actually had a faux Southern accent. There's pandering and then again there's pandering. Mrs. Clinton then went on to exclaim that she too had been fighting for civil rights passing out leaflets on the quad at Brown. And isn't that almost the same as being beaten with truncheons by state troopers on horseback on the Edmund Pettis Bridge. It's almost the same thing isn't it?

I used to work for a very smart guy and he taught me a lot. He had a son named Bubba who just had a knack for pissing people off. He lamented, "He can't open his mouth without pissing everyone off." He reminds me of Hillary whether it's "I'm not going to stay home and bake cookies" or her more recent comments about, "Nobody likes Bernie Sanders." This is her character flaw, not knowing when to attack and when to shut up. Her husband ran for President as a "New" Democrat aka a moderate Republican and from the day Bill swore the oath it was clear Hillary had political aspirations and that's fine. As long as you remember we elected Bill"not Hillary. It made her incredibly polarizing. No one had ever used their husband's election as a political springboard before.