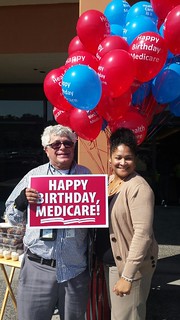 Medicare turns 50 next week. It was signed into law July 30, 1965 -- the crowning achievement of Lyndon Johnson's Great Society. It's more popular than ever.

Yet Medicare continues to be blamed for America's present and future budget problems. That's baloney.

A few days ago Jeb Bush even suggested phasing it out. Seniors already receiving benefits should continue to receive them, he said, but "we need to figure out a way to phase out this program for others and move to a new system that allows them to have something, because they're not going to have anything."

Bush praised Rep. Paul Ryan's plan to give seniors vouchers instead. What Bush didn't say was that Ryan's vouchers wouldn't keep up with increases in medical costs -- leaving seniors with less coverage.

The fact is, Medicare isn't the problem. In fact, it's the solution.

Its costs are being pushed upward by the rising costs of health care overall -- which have slowed somewhat since the Affordable Care Act was introduced but are still rising faster than inflation.

Medicare costs are also rising because of the growing ranks of boomers becoming eligible for Medicare.

Medicare offers a way to reduce these underlying costs -- if Washington would let it.

Medical costs continue to rise because doctors and hospitals still spend too much money on unnecessary tests, drugs, and procedures.

Consider lower back pain, one of the most common ailments of our sedentary society. Almost 95% of it can be relieved through physical therapy.

But doctors and hospitals often do expensive MRI's, and then refer patients to orthopedic surgeons for costly surgery. Why? Physical therapy doesn't generate much revenue.

Or say your diabetes, asthma, or heart condition is acting up. If you seek treatment in a hospital, 20 percent of the time you're back within a month.

Related Topic(s): Birthday; Healthcare; Medicare; Seniors, Add Tags
Add to My Group(s)
Go To Commenting
The views expressed herein are the sole responsibility of the author and do not necessarily reflect those of this website or its editors.