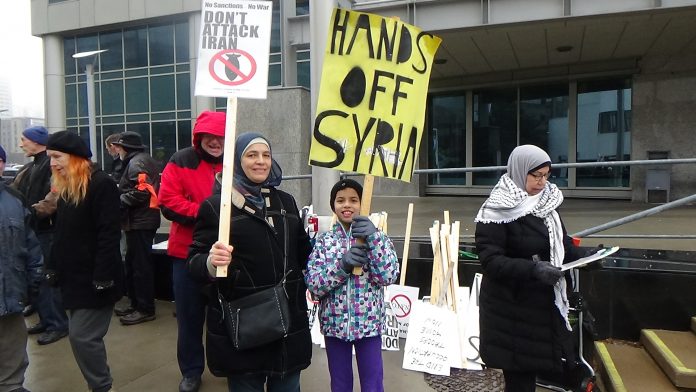 On January 25, at a rally organized by the Hamilton Coalition To Stop The War, in front of the Federal building, in Hamilton, ON Canada, Mark Taliano denounces the dictatorship of globalizing institutions, in particular, the NATO military alliance.

He refutes NATO legitimacy by arguing that supranational Ruling Classes must fabricate consent for their imperial agendas with false flag terrorism, demonization campaigns, fake atrocity stories " and by deplatforming the truth.

He destroys the lie of "humanitarian warfare", explaining that prey country leaders are always demonized, and atrocity stories invented, with a view to creating the perception that "target populations" must be "saved".

President Assad, he explains, is not a brutal dictator. He does not use chemical weapons against his own people, and furthermore, even according to a NATO poll, he is overwhelmingly supported by most Syrians.

Taliano lays bare the Big Lie of the "War on Terror", explaining that the West has a long history of supporting al Qaeda and affiliated mercenary proxies to destroy prey countries.

Domestic populations too are being attacked, says Taliano, since good jobs are being delocated to vassal countries which have few human and labour rights.

The protestors' shared demand that Canada leave NATO demonstrates that they see the Life-destroying, Democracy and Freedom-destroying reality behind NATO's seemingly benevolent mask.

Related Topic(s): Assad; Humanitarian; Military; Perception; Stop These Wars; Terrorism; Wars, Add Tags
Add to My Group(s)
Go To Commenting
The views expressed herein are the sole responsibility of the author and do not necessarily reflect those of this website or its editors.