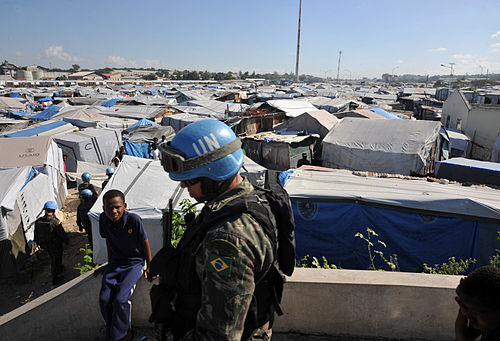 The United Nations may be necessary to build a better world, but that doesn't mean the international body should be above criticism. The case of Haiti reveals how the UN can be part of the problem rather than the solution.

On Sunday tens of thousands demonstrated in Port-au-Prince against the foreign-backed dictatorship of Jovenel Moise. Reports suggest police began firing on protesters as they neared the UN headquarters. Ultimately, one protester was killed and a number of journalists injured. In response James North tweeted, "people elsewhere may not understand why the thousands of pro-democracy protesters would march toward U.N. headquarters. There's a longer answer, but for now: Haitians believe, with good reason, that the U.N. helps prop up dictator Jovenel Moise."

Alongside the US, Canada, Spain, France, Germany, Brazil and Organization of American States (OAS), the UN is part of the "Core Group" of foreign ambassadors widely believed to be the real power behind Moïse. The Core Group releases periodic statements concerning the country's political affairs. The UN Mission, now known as Bureau inte'gre' des Nations Unies en Haïti, has aligned with the US, Canada and OAS against the vast majority of Haiti's population and institutions in endorsing Moise's bid to extend his mandate as president. The international body announced it would give $20 million for elections that all the opposition parties reject since few believe a fair election is possible under Moise's direction. In the summer Haiti's entire nine-person electoral council resigned in response to Moïse's pressure and then he unilaterally appointed new members.

As North alludes to, the UN's current position is part of the international body's pattern of hostility towards Haitian democracy and sovereignty. After the US, France and Canada ousted President Jean-Bertrand Aristide and thousands of other elected officials in February 2004, the three countries soldiers were incorporated into a UN mission that backed up a coup government's violent crackdown against pro-democracy protesters. Subsequently led by Brazil, the UN force also killed dozens of civilians directly when it pacified Cite' Soleil, a bastion of support for Aristide. The worst incident was early in the morning on July 6, 2005, when 400 UN troops entered the densely populated neighbourhood. Eyewitnesses and victims of the attack claim Mission des Nations Unies pour la stabilisation en Haïti (MINUSTAH) helicopters fired on residents throughout the operation. The cardboard and corrugated tin wall houses were no match for the troops' heavy weaponry, which fired "over 22,000 rounds of ammunition", according to a US embassy file released through a Freedom of Information request. The raid left at least 23 civilians dead, including numerous women and children. The UN initially claimed they only killed "gang" leader Dread Wilme.

Aside from its role in the coup and subsequent political repression, the UN's disregard for Haitian life caused a major cholera outbreak, which left over 10,000 dead and one million ill. In October 2010 a UN base in central Haiti recklessly discharged sewage, including the feces of newly deployed Nepalese troops, into a river where people drank. This introduced the waterborne disease into the country. Even after the deadly cholera outbreak, UN forces were caught disposing sewage into waterways Haitians drank from.

UN troops were responsible for countless other abuses ranging from beatings to rape.

In August 2010 16-year-old Ge'rard Jean-Gilles, who ran miscellaneous errands for Nepalese troops, was found dead hanging inside a MINUSTAH base in Cap-Haïtien. Several days earlier, a Nepalese soldier publicly tortured a minor in the country's second biggest city. The soldier, reported Haitian media, forced "his hands into the youth's mouth in an attempt to separate his lower jaw from his upper jaw, tearing the skin of his mouth."

UN troops had illicit sexual relations, sodomized boys and raped young girls. In mid 2017 a Canadian and British academic oversaw a study of 2,500 Haitians who lived near UN bases. They were asked "what it's like to be a woman or a girl living in a community that hosts a peacekeeping mission." Without being asked specifically about sexual relations with peacekeepers, 265 respondents talked of children fathered by members of the peacekeeping force, which were widely nicknamed "Pitit MINUSTAH". Many single mothers were left struggling with stigma and poverty when the soldiers departed. Respondents described girls as young as 11 sexually abused and impregnated by UN representatives. Officially, UN soldiers are prohibited from having sexual relations with locals.

Canada's biggest contribution to a UN mission over the past 15 years has been in Haiti. During that time and before the UN has been a tool of imperialism. Full stop. As anti-Aristide insurgents made their way to Port-au-Prince in February 2004, the international community ignored the elected government's requests for "a few dozen" peacekeepers to restore order in a country without an army. On February 26, three days before removal, the OAS permanent council called on the UN Security Council to "take all the necessary and appropriate urgent measures to address the deteriorating situation in Haiti." CARICOM called on the UN Security Council to deploy an emergency military task force to assist Aristide's government.

Despite ignoring appeals for support from Aristide, CARICOM and the OAS in the preceding days, soon after US/French/Canadian troops ousted the elected government the UN Security Council passed a motion authorizing an intervention. In a three-minute Sunday night meeting between 9:52 and 9:55 PM, according to the official UN summary the Security Council "authorized the immediate deployment of [a] Multinational Interim Force for a period of three months to help to secure and stabilize the capital, Port-au-Prince, and elsewhere in the country."

Today Haitians live with the results. If Canadians blindly promote an organization that has been a key organizer of repression and misery what should Haitians think of us?

On February 28 the Canadian Foreign Policy Institute is hosting a discussion of Haiti Betrayed, a powerful indictment of Canada's role in the 2004 coup and subsequent policy in the country. In the week leading up to the event the film will be available to watch for free for those who register in advance.

Related Topic(s): Haitian Cholera Crisis, Add Tags
Add to My Group(s)
Go To Commenting
The views expressed herein are the sole responsibility of the author and do not necessarily reflect those of this website or its editors.