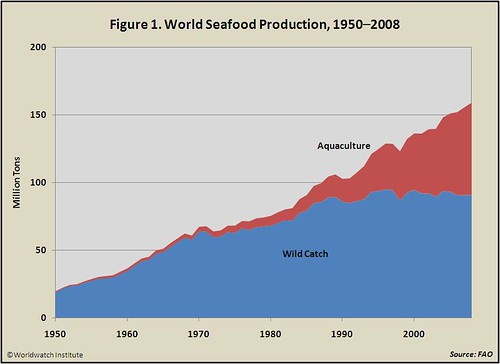 Fishing is a critical means of providing food, livelihood, trade, and economic growth in many developing countries-as well as the United States. In many small island developing nations and coastal countries - such as Bangladesh, Sierra Leone, and Ghana - fish provide at least 50 percent of the population's total animal protein intake. And approximately 43.5 million people's year-round incomes depend on fish production while another 4 million's depend on seasonal jobs as fishers and fish product workers.

Yet, despite the important role of fisheries in maintaining economic and social well-being, "fisheries around the world are being plundered or exploited at unsustainable rates," said Achim Steiner, Executive Director of the UN Environment Programme (UNEP). Speaking about the preview release of the UNEP's Green Economy Report: A Preview, Mr. Steiner argued that the current fishing industry "is a failure of management of what will prove to be monumental proportions unless addressed."

The Green Economy Initiative report, scheduled for release later this year, argues that investment in "greening" the economy across a range of sectors - including agriculture, fisheries, and water - can drive global economic recovery and lead to future prosperity, job creation, and improved environmental conservation.

Currently, some 52 percent of the world's marine fisheries are fully exploited and producing at - or close to - their maximum limits. Another 28 percent of the world's marine fisheries are categorized as over-exploited, depleted, or recovering from depletion-a producing less than their maximum potential. And when fisheries collapse, there is more than just the loss of fish life to worry about: livelihoods, communities, and entire economies are ruined.

Though the current outlook on fisheries may be troubling, researchers say that all is not lost. According to the Green Economy Initiative's report, an $8 billion annual investment in rebuilding and "greening" the world's fisheries could have a positive, and lasting, impact on the fishing industry worldwide. Researchers say this investment has the potential to both increase fish catches and generate $1.7 trillion in long-term economic returns over the next four decades.

To read more about fisheries and the impact of the fishing sector, see: Catch of the Day: Choosing Seafood for Healthier Oceans, Farming Fish for the Future, and Vital Signs Online: Global Fish Production Continues to Rise.

To read more about fisheries and the impact of the fishing sector, see: Catch of the Day: Choosing Seafood for Healthier Oceans, Farming Fish for the Future, and Vital Signs Online: Global Fish Production Continues to Rise.

BorderJumpers.org began in October 2009 in Addis Ababa, Ethiopia -- when Bernard Pollack and Danielle Nierenberg began a journey to visit nearly every country in Africa. At every stop they are meeting with farmers, community organizers, labor (more...)
Related Topic(s): Agriculture; Agriculture; Alternative; Farming; Food; Future; Management; Population; Water Crop Irrigation; Water Wars, Add Tags
Add to My Group(s)
Go To Commenting
The views expressed herein are the sole responsibility of the author and do not necessarily reflect those of this website or its editors.