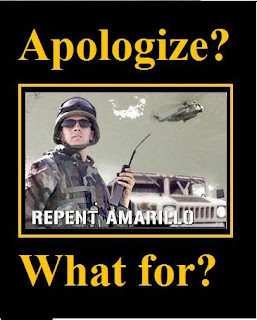 Keith Olbermann gave an insightful special commentary concerning the Rotten Rhetoric that has engulfed politics. I think everyone should view it: he raises some good points and he even apologizes to viewers for using the same kind of militaristic, gun-related rhetoric. Furthermore, it should be pointed out that Olbermann included both Left and Right in his speech and transcended the image of crosshaired gun sights by condemning all violent political rhetoric. It seemed quite inclusive. However, it did not include a vital component of today's American society.

It did not include God.

No, I'm not going all batsh *t-crazy, at least not in a theological sense: with a God who has been the instigator of all things good and bad, apologies are not on the table. Explanations aren't even considered. "He works in mysterious ways" has been the ubiquitous reason why bad things happen to good people. It's lame, but God gets away with doing things simply because He's ...God.

And He's done some pretty horrendous things: drowned innocent animals in the Great Flood, commanded genocide (slaying of the Moabites ), condoned slavery, toyed sadistically with Jonah on a bet with Satan, and created the Texas Board of Education. But perhaps the worst thing God has ever done to humanity is to create hypocritical and corrupt apostles, prophets and preachers who will never apologize either: as "representative" "anointed" even "beloved" shepherds of God, they and their chosen feel they are exempt from guilt, hence, without consciences and are to able to do most anything as long as they rationalize it as "God's will."

The sins that have been committed against humanity and in the name of God are, like Satan's followers, Legion. History looks a lot like the infinite expanse of dead and dying soldiers in Gone With The Wind: religious strife litters humanity's past and "Peace On Earth, Good Will Towards Men" seems like a bad joke. And it will stay that way as long as there are "men of God" campaigning for the sake of righteousness.

The instance of Jared Lee Laughner's horrendous assassination attempt of Rep. Gabrielle Giffords has prompted the MSM to analyze just how much politicians and pundits exacerbate violence with their speech and actions. Notice, however, that not one commentator mentioned anyone within the Religious Right communities: Giffords has weighed in as a pro-choice, pro- ENDA and pro-Health Care Reform. There are over 500 churches in the Tucson metropolitan area, with Baptist (approx. 80), Mormon (90+) and Catholic (100+) churches. What are the chances that none of them campaigned vitriolically against Giffords ? Have any of those churches apologized?

Hardly. Not a peep out of any of them. Religious demonizers , like God, never apologize.

And how many of those churches supported Giffords opponent Jesse Kelly who, BTW, sponsored a campaign fundraiser* wherein people could shoot an M-16 for sport? Those churches and the rest of the Religious Right, if called on the carpet, will probably refocus the debate by pointing to entities like Westboro Baptist Church (who have announced that they will picket the funerals of those killed in the shooting). They will use stark contrast to deflect criticism or they will simply take an how-DARE-you stance, like when Tony Perkins ludicrously told the nation that the Religious Right had absolutely no culpability in the suicides of gay teens:

There is an abundance of evidence that homosexuals experience higher rates of mental health problems in general, including depression. However, there is no empirical evidence to link this with society's general disapproval of homosexual conduct.

Perhaps the most insipid lack of remorse for extremely violent message content lies in everything done by a group named Repent Amarillo. I've written about it before, but its last publicity-grabbing escapade deserves to be reiterated: the execution of Santa Claus. "Santa" was really a pinata (to placate critics, of course), but the guns and ammo used were real...in front of a group of children ...who will probably develop psychoses larger than that of Jared Lee Laughner . No one rushed forward to accuse them of emotional child abuse because they were, of course, acting in the "name of the Lord."

Rampages like Laughner's help develop a serious time of reflection as to their causes. Violent rhetoric, militaristic terms, virulent attack modes can come from pulpits as well as politicians. We live amidst a slew of God's self-appointed emissaries who have never apologized for their organized religion's crimes and never expect to apologizefor their Rotten Rhetoric now or in the future. They may indulge themselves in vicious platitudes of the worst kind while thinking themselves totally unaccountable.

After all, righteous arrogance has its privileges. Just ask God.

* Flier blurb: "Get on Target for Victory in November Help remove Gabrielle Giffords from office Shoot a fully automatic M16 with Jesse Kelly."

Rev. Dan Vojir is has been writing/blogging on religion and politics for the better part of ten years. A former radio talk show host (Strictly Books " Talk America Radio Network) and book publisher, Dan has connected with some of the most (more...)
Related Topic(s): Accountability; Apologies; Arrogance; Assassination; Churches-Violence; Demonizer; ENDA; Genocide; Giffords-Gabrielle; God; (more...) Jared Lee Laughton; Jared Loughner; Jesse Kelly; Pro-choice; Repent Amarillo; Tony Perkins; Tucson; Westboro Baptist Church, Add Tags  (less...)
Add to My Group(s)
Go To Commenting
The views expressed herein are the sole responsibility of the author and do not necessarily reflect those of this website or its editors.