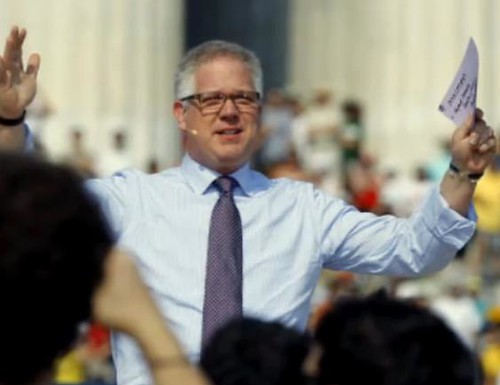 Pundit and radio show host Glenn Beck, a man who possesses an evangelical flare for expressing his opinions to viewers, held his "Restoring Honor" Rally at the Lincoln Memorial yesterday morning, which was the anniversary date of Martin Luther King Jr.'s "I Have a Dream Speech." The rally was a conscious attempt to not only re-appropriate the history of Martin Luther King Jr. but also to push the country closer toward adhering to more principles and tenets of Biblical Law.

You'd be forgiven if you thought Alveda King is someone who was like a Jackson in the Michael Jackson family--someone who is out to exploit the family name for profit and honor. King has said of homosexuality, "It is statistically proven that the strongest institution that guarantees procreation and continuity of the generations is marriage between one man and one woman." During the rally, she called for more prayer in public schools and referred to abortion as "a womb war, which threatens the fabric of our society."

Beck and organizers chose, prior to the rally, to put on an event that could be called "non-political," to emphasize the religious devotion and the revival of spirit that could come out of this event instead. Those in attendance were not allowed to bring in signs that Americans could potentially see on the news, which would clearly indicate what percentage of the crowd was literate and sociopathic and what percentage was not.

While Beck did say that he wanted this rally to help "reclaim the civil rights movement," the rally indicated Beck was uninterested in the black revolutionary spirit of King that pushed him to fight for de-segregation and equality and far more interested in using King as a prop who understood how faith and belief in God could unleash goodness and greatness in America.

In his speech, Beck offered up a story on the Washington monument that one could say proved Beck is committed to an onslaught on intellectual thinking. He used a story of the Washington monument--how it was being built until the Civil War and then was finished afterward--and argued that was a true example of American triumphalism. Only Beck would suggest that something that makes logical sense indicates America has a true spirit of resilience. And, really, the only reason monuments figure into Beck's revivals and the only reason he holds them in the presence of memorials is because they provide a nice theater for his American revisionist history to be advanced.

Kevin Gosztola is managing editor of Shadowproof Press. He also produces and co-hosts the weekly podcast, "Unauthorized Disclosure." He was an editor for OpEdNews.com
Related Topic(s): Beck University; Faith; Glenn Beck; God; History; Hope Hopefulness; Military, Add Tags
Add to My Group(s)
Go To Commenting
The views expressed herein are the sole responsibility of the author and do not necessarily reflect those of this website or its editors.