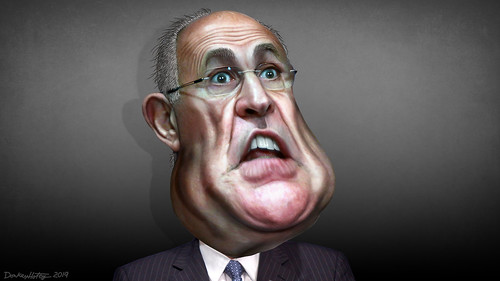 The latest Trump administration news is a Washington Post article reporting that Trump's "personal lawyer" Rudy Giuliani, was working a private "back channel" negotiation this past year with embattled Venezuelan President Nicola's Maduro in a failed effort to persuade Maduro to quit his office and leave the country.

The Post, and some of the congressional Democrats who are always salivating at opportunities to raise further impeachment issues with which to charge President Trump, are claiming that in so doing while official US policy was to drive Maduro out of office through a military coup, a civil war, or even an assassination, was a potential violation of the Logan Act, a hoary statute passed back in antebellum Washington, which has never actually been used against anyone.

That act states that "any citizen of the US" who attempts to "influence" a foreign government or "any officer of a foreign government" in "relation to any disputes or controversies with the US" or to "defeat the measures of the United States," shall be "fined or imprisoned not more than three years."

That law has Democrats salivating since looking Giuliani in jail would be the best way to convince the alcohol-addled former Mayor of New York to "sing" about his actions on behalf of the president the issue that led to the two impeachment articles already on the books.

The problem is that, as with much of the anti-Russian attacks leveled against President Trump, Democratic legislators are so caught up in a bizarre Cold War 2.0 mentality that they don't realize the real crime is trying to criminalize what would, in a saner world, seem like a wiser course of action.

Compared to Giuliani's alleged effort to ease Maduro out of office without violence, the policy being pursued at the time by Trump's National Security Advisor John Bolton, of promoting a military coup against Maduro, installing a no-name US puppet named Juan Guaidó, and driving Maduro out of power or perhaps even killing the country's elected leader seems like the work of a psychopath. Bolton made no secret of his and, under his authority, the US government's efforts in trying to persuade Venezuelan military leaders to mutiny, or to encourage government soldiers and disaffected citizens to engage in sedition, perhaps attacking Venezuelan government and loyalist troops from the sanctuaries in neighboring Colombia. The US also, under Bolton's leadership of the NSC, was blocking Venezuelan oil sales, stopping tankers and using the US's control of the international banking system to prevent Venezuela from receiving payment for shipments that made it through to customers in Europe and elsewhere. The idea has, for some time now, been to starve Venezuela into a state of rebellion.

These are acts of war, and had they been successful, Venezuela today would be mired in a brutal civil war"

Related Topic(s): Giuliani Rudy; Impeachment; John Bolton Warmonger; Venezuelan Coup, Add Tags
Add to My Group(s)
Go To Commenting
The views expressed herein are the sole responsibility of the author and do not necessarily reflect those of this website or its editors.