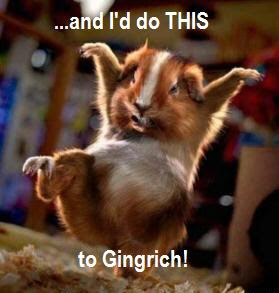 The irony of today's Gingrich morality debate is that it highlights rather than downplays the hypocrisies and the falsehoods spun by "social conservatives." Gingrich's infidelity mea culpas served him well in South Carolina, of course. Sarah Palin  blasted the "dumb arse" media  for covering the "open marriage story."  And his victory was lauded by  organizations such as NOM  (National Organization for Marriage). Gingrich's past, it seems is blissfully  in  the past and has nothing whatsoever to do with the country's economic future.

The the future of the country's morality? Why, it lies not with Gingrich, but with the country's more pulpit-driven lawmakers ... and the pulpits themselves, of course. Mea culpa's evidently helped homophobic "Bishop" Eddie Long  regain his stature at New Birth Missionary Church last Sunday where  he was crowned "king"  by a suspect "rabbi". He was paraded around on a throne and clothed in tabernacle scrolls (they couldn't afford spandex?).  People are calling it a mockery, but his congregation is calling it righteousness.

RAMPING UP THE RIGHTEOUSNESS

So in the culture war of this year, "social conservatives," "values voters" and just plain ole' fundamentalists are ramping up the rhetoric to obscene levels. Obscene in their own minds. Hysterical in others.

On a recent appearance on LaBarbera's radio show, [ Americans for Truth About Homosexuality ] [ Dr./Pastor Patrick  ] Wooden called homosexuality a "wicked, deviant, immoral, self-destructive, anti-human sexual behavior" and should make people "literally gag." Wooden added that gay men have "to wear a diaper or a butt plug just to be able to contain their bowels" by their "40s or 50s" as a result of "what happens to the male anus." (listen to excerpt below)

Then we have this man who is not capable of teaching sex education:

"Most people realize that AIDS came from the homosexual community -- it was one guy screwing a monkey, if I recall correctly, and then having sex with men. It was an airline pilot, if I recall."

"My understanding is that it is virtually -- not completely, but virtually -- impossible to contract AIDS through heterosexual sex"

He is, of course, Tennessee state senator Stacey Campfield who, late on, was refused service at a restaurant because of his bigoted views.

"What is the average lifespan of a homosexual? It's very short ... Anybody out there who's listening -- your twelve listeners on your show, you have them Google "average homosexual lifespan.' It's very short."*

The "evidence" cited, of course, is a regurgitation of old lies, myths and irrelevant controversies. We can view vaguely literate "research" HERE and HERE. And they are repeated by every Family Research Council, every American Family Association, every Christian Right mega-church pastor in the country to push the electorate and the political candidates into a false sense of righteousness in the voting booth.

From Eddie Long being crowned "king" to prophetess/apostle Cindy Jacobs "curing" a woman of her hysterectomy, the moralizing elements of the far right promise to attack liberals with cruel distortions, irrational fears (ala anti-Islam),  chicanery and pomposity never seen since the Crusades.

But the influence of these deep thinkers is not to be dismissed, because it leads to people being discriminated against, or bludgeoned cats left on doorsteps with the word "liberal" scrawled across them.

Rev. Dan Vojir is has been writing/blogging on religion and politics for the better part of ten years. A former radio talk show host (Strictly Books " Talk America Radio Network) and book publisher, Dan has connected with some of the most (more...)
Related Topic(s): Anti-Muslim; Anti-gay; Bishop Eddie Long; Cindy Jacobs; Culture War -s-; Gingrich Newt; Michelangelo Signorile; Sexual Perversion; Sexually Transmitted Diseases AIDs-HIV H; Stacey Campfield, Add Tags
Add to My Group(s)
Go To Commenting
The views expressed herein are the sole responsibility of the author and do not necessarily reflect those of this website or its editors.