Barbara Arnwine was livid about this fluorescent violation of both Georgia and Federal voting rights law, a subject she teaches at Columbia University.

"All the polling sites they cut were in Black and Brown neighborhoods," said Arnwine, Founder of the Transformative Justice Coalition, who relocated to Atlanta for the US Senate run-offs. She expressed concern that Georgia leads the nation in new, sophisticated Jim Crow vote manipulation tactics.

Cobb County Early Voting Closures The state is required by law to provide the same number of polling locations during a run-off election -- like the one in Georgia happening right now -- as it does ...
(Image by YouTube, Channel: Greg Palast)   Details   DMCA
And some less sophisticated tactics as well, like this shut-down of polling stations in Black neighborhoods in Cobb County. It's a trick the ACLU of Georgia busted in the 2018 race between now-Governor Brian Kemp and Stacey Abrams.

These five early voting stations are supposed to serve over half a million voters in a county that includes the suburbs of Atlanta. 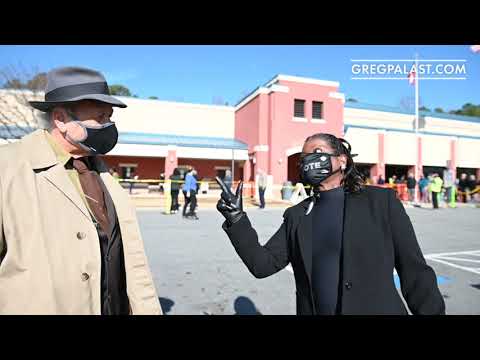 Cobb County Early Voting Closures The state is required by law to provide the same number of polling locations during a run-off election -- like the one in Georgia happening right now -- as it does ...
(Image by YouTube, Channel: Greg Palast)   Details   DMCA

Georgia law, the ACLU wrote to the Georgia state officials, does not allow for closing polling stations after November 5. Local officials, unavailable to speak to us, have told media that they did not have enough poll workers to follow the law, though voting rights groups have offered to fill the gap.

Greg Palast's investigative reports appear in Rolling Stone, the Guardian and on BBC Television. His latest film, The Best Democracy Money Can Buy, on how Donald Trump stole the 2016 election, is available on Amazon. Palast is Patron of the Trinity (more...)
Related Topic(s): Georgia Election; Republican Voter Suppression; Voter Disenfranchisement, Add Tags
Add to My Group(s)
Go To Commenting
The views expressed herein are the sole responsibility of the author and do not necessarily reflect those of this website or its editors.