But Will the Politicians Listen? 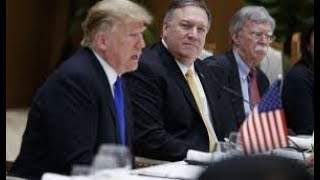 With tensions increasing in the Persian Gulf, two groups of prominent American citizens -- national security experts and religious leaders -- and women Nobel Peace Laureates, including one from Iran and one from the U.S., are speaking out against a U.S. war on Iran. If President Trump listens to these groups, he will get a very different perspective from what he gets from his in-house national security officials Secretary of State Mike Pompeo and National Security Adviser John Bolton and the White House's resident religious leader Vice-President Mike Pence.

There is no doubt where Pompeo, Bolton and Pence stand on Iran. On July 8 all three spoke in bellicose words and tones about the threat to the United States from Iran to the convention of the Christians United for Israel (CUFI) headed by mega-evangelical preacher John Hagee.

Vice President Pence gave his longest foreign policy address of his term as Vice President to CUFI. On Iran, Pence said, "Let me be clear: Iran should not confuse American restraint with a lack of American resolve...we hope for the best, but the United States of America and our military are prepared to protect our interests and protect our personnel and our citizens in the region...and we will never allow Iran to obtain a nuclear weapon."

Pompeo who in March 2019 said that God may have sent Trump to save Israel from Iran, continued his lambasting of Iran at the conference as did Bolton.

On May 29, 2019, 76 U.S. military generals, admirals, ambassadors and national security experts wrote to President Trump: "We write to you to express our deep concern with the current escalation with Iran in the Arabian Gulf... A war with Iran, either by choice or miscalculation, would produce dramatic repercussions in an already destabilized Middle East and drag the United States into another armed conflict at immense financial, human, and geopolitical cost... As President and Commander-in-Chief, you have considerable power at your disposal to immediately reduce the dangerous levels of regional tension. Crisis de-escalation measures should be established with the Iranian leadership at the senior levels of government as a prelude to exploratory diplomacy on matters of mutual concern. The protection of U.S. national interests in the Middle East and the safety of our friends and allies requires thoughtful statesmanship and aggressive diplomacy rather than unnecessary armed conflict."

"As national security professionals with extensive careers in the U.S. armed forces and diplomatic service, we have witnessed first-hand how quickly disputes can spiral out of control. The lack of direct communication between U.S. and Iranian political and military leaders during a time of heightened rhetoric only increases the possibility of a miscalculation resulting in unintended military conflict. Washington and Tehran are talking past each other and taking actions the other views as dangerously provocative at best and the beginning of forceful action at worst."

On July 9, at a press conference on Capitol Hill at the United Methodist Building, six religious leaders, led by Jim Wallis of Sojourners, announced that 200 American church leaders had signed an extensive statement and "a clear and emphatic NO to a war with Iran. Diplomacy is the effective and necessary alternative to what would be a disastrous and indefensible war."

In a statement titled "Back From The Brink": Faith leaders call for diplomacy, not war, with Iran, the religious leaders wrote that "a United States war with Iran would be an unmitigated disaster, morally and religiously indefensible," and called on U.S. faith leaders "to rise up, and...demand that our political leaders seek real diplomatic and humanitarian solutions to the current crisis and refrain from military confrontation with Iran."

The leaders also called on Iran to "repudiate terrorism and not increase uranium enrichment." They said that a war would have disastrous human and environmental consequences, would be strategically unnecessary, and would lead to regional destabilization, increased terrorism, and unsustainable financial burdens...as since the start of the war in Iraq, the cost of wars in the Middle East has been almost $6 trillion and 500,000 lives lost."

Ann Wright is a 29-year US Army/Army Reserves veteran, a retired United States Army colonel and retired U.S. State Department official, known for her outspoken opposition to the Iraq War. She received the State Department Award for Heroism in 1997, after helping to evacuate several thousand (more...)
Related Topic(s): Ambassadors; Generals; Iran; National Security; Peace; Sanctions, Add Tags
Add to My Group(s)
Go To Commenting
The views expressed herein are the sole responsibility of the author and do not necessarily reflect those of this website or its editors.