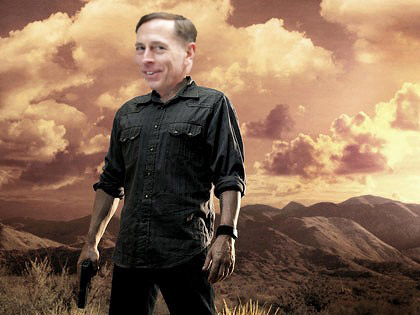 Flickr Photo by Kevin Gosztola | You may know Gen. David Petraeus. You may even know Jack Bauer. But, do you know Gen. Jack Petraeus?

Gen. Jack Petraeus favors secret military operations. He is the leading cause of death in Middle Eastern men and, when taking action, he doesn't need a translator. Torture is the same in every language (except maybe American English which refers to torture as "enhanced interrogation techniques").

The New York Times' Mark Mazzetti reports Gen. David H. Petraeus has signed a "secret directive" that orders a "broad expansion of clandestine military activity in an effort to disrupt militant groups or counter threats in Iran, Saudi Arabia, Somalia and other countries in the region."

According to Mazzetti, the directive was signed in September and would send "small teams of American troops" to "both friendly and hostile nations in the Middle East, Central Asia and the Horn of Africa to gather intelligence and build ties with local forces." More importantly, "the order also permits reconnaissance that could pave the way for possible military strikes in Iran if tensions over its nuclear ambitions escalate."

Gen. Petraeus suggested at the bottom that this would give troops, foreign businessmen, academics and others "persistent situational awareness." This may be something like "total information awareness."Most likely it's the general'seuphemism for paranoia.

Out of context, it might seem like permission for secret operations is going in a direction that America may want to consider not going in. Secret operations, especially if so-called terrorists knew to expect them, might lead to more destabilization of the world, more deaths and destruction. Do people really want that?

This would be a huge revelation if history didn't indicate that departments handling foreign and domestic defense or security operations have claimed the authority to engage in covert activity time and time again.

Mazzetti ends the article reminding Americans, "During the Bush administration, Defense Secretary Donald H. Rumsfeld endorsed clandestine military operations, arguing that Special Operations troops could be as effective as traditional spies, if not more so."

In 2004, The Jerusalem Post reported that Rumsfeld considered provoking Syria by deploying U.S. Special Forces to attack Hezbollah bases near the Syrian border. It outlined how this could satisfy U.S. strategy by pressuring Damascus into ending support for anti-Israel Palestinian groups, persuade Syria to abandon its WMDs and withdraw troops from Lebanon, stimulate a situation where Syrian leader Bashir Assad could be ousted, and crush Hezbollah and end Syria's connections to al Qaeda.

Such a plan can be linked to those within the Pentagon who believe in order to fight the "war on terror" elite secret armies with permission to use all covert capabilities must be utilized. In 2002, William Arkin reported for the Los Angeles Times on Rumsfeld's fetish for black ops and a briefing drafted by the Defense Science Board called the "2002 Summer Study on Special Operations and Joint Forces in Support of Countering Terrorism."

The Board recommended, according to Arkin, the "creation of a super-Intelligence Support Activity, an organization it [dubbed] the Proactive, Preemptive Operations Group, (P2OG), to bring together CIA and military covert action, information warfare, intelligence, and cover and deception.

P2OG would "launch secret operations aimed at "stimulating reactions' among terrorists and states possessing weapons of mass destruction -- that is, for instance, prodding terrorist cells into action and exposing themselves to "quick-response' attacks by U.S. forces."

One might remember news from June 2009 uncovered by Seymour Hersh that an "executive assassination ring reporting directly to Vice President Dick Cheney" existed.

Of the ring, the Guardian reported, "Dick Cheney, the former vice president, ordered a highly classified CIA operation hidden from Congress because it pushed the limits of legality by planning to assassinate al-Qaida operatives in friendly countries without the knowledge of their governments." The "hidden operation [also] involved plans by the CIA and the military to launch operations, similar to those by Israel's Mossad intelligence service, to hunt down and kill al-Qaida activists abroad without informing the governments concerned, even though some were regarded as friendly if unreliable."

The news made headlines for a day or two and then quickly dissipated as everyone went back to viewing their regularly scheduled programming. Most probably assumed that the program was over. No. Glenn Greenwald reported for Salon in January and April of this year that the Obama Administration was claiming the authority to assassinate U.S. citizens without according U.S. citizens who might be terrorists due process.

Kevin Gosztola is managing editor of Shadowproof Press. He also produces and co-hosts the weekly podcast, "Unauthorized Disclosure." He was an editor for OpEdNews.com
Related Topic(s): American Foreign Policy; Assassination; Cheney Assassination Ring; Covert Ops; General Petraeus; Leaks; Military; Obama Administration; Pentagon; People Dick Cheney; (more...) Security; Special Operations; Terrorism, Add Tags  (less...)
Add to My Group(s)
Go To Commenting
The views expressed herein are the sole responsibility of the author and do not necessarily reflect those of this website or its editors.