Hamas should not trade the rights and hopes of the Palestinian people for its own survival by making a deal with Dahlan. 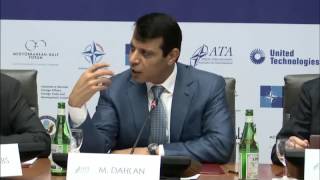 "We have made mutual efforts with our brothers in Hamas to restore hope for Gaza's heroic people," Mohammed Dahlan told Palestinian legislators gathering in Gaza on Thursday, July 27. He spoke via satellite from his current exile in the United Arab Emirates.

The audience clapped. True, Gaza has been pushed to the brink of humiliation so that its truly heroic people may lose hope. But the fact that it was Dahlan that uttered these words appeared odd. More bizarre is the fact that his audience included top members of Hamas.

Dahlan, who had once been praised by George W Bush and was chosen by neoconservatives to lead a coup against the elected Hamas government in Gaza in 2007, seems to have finally managed to sneak his way back to Palestinian politics. Outrageously, however, Dahlan's ominous return is facilitated by no other group than his archenemy, Hamas.

It is convenient to blame such dramatic changes of attitude on the nature of politics, ever selfish, "pragmatic" and often brutal.

But it is far more complex, and tragic than such a truism. Gaza has been under siege for over a decade. The Israeli siege began in 2006 when Hamas won parliamentary elections in a decisive victory, leaving Fatah, the leading faction of the Palestine Liberation Organization (PLO), in the opposition for the first time since its inception the 1960s.

Proving incapable of understanding or accepting the democratic process, Fatah lashed out at its Hamas rival and worked hard to undermine its rise to power.

But it was mostly Israel, backed by the United States that vehemently rejected the choice of the Palestinian majority. Within months, Israel imposed a siege on Gaza, the centre of Hamas' popular support, while the US withheld financial assistance to the Palestinians, urging its allies to do the same.

Hamas was left with no other option but to form a government alone. To protect its political institutions, the movement also established its own interior ministry police force. Then, alarm bells rang even louder.

Hand-picked by the neocons to overthrow Hamas

It was Gaza-based Fatah leader Mohammed Dahlan who was selected to lead the mission of overthrowing Hamas. The choice was made by W Bush's own National Security Council Middle East adviser, Elliot Abrams.

Then, the neocons were leading a campaign to construct a "New Middle East," which was the culmination of the US invasion of Iraq in 2003 and then-Secretary of State Condoleezza Rice's aggressive "diplomacy" in the region.

"The situation for Hamas and Gaza is dire. But there can be no moral justification to swap the rights, hopes and aspirations of the Palestinian people with the arrogant ambitions of a self-obsessive warlord and his wealthy Arab benefactors."

The US government was eager to show that its violent military adventures in the Middle East would eventually lead to political stability through a US-sponsored democracy initiative.

Hamas' election victory was a devastating blow to the Bush administration's efforts. The Islamic group that championed armed resistance and rejected the Washington-consensus and its pro-Israeli vision in the Middle East presented Washington with an unprecedented dilemma.

Related Topic(s): Fatah; Hamas; Israel; Mohammed Dahlan; Neoconservatives; Palestinian, Add Tags
Add to My Group(s)
Go To Commenting
The views expressed herein are the sole responsibility of the author and do not necessarily reflect those of this website or its editors.