The "Liberator of Libya" turned on the Colonel in 2011, but it seems the former French president's ascendancy owed much to the late dictator's beneficence 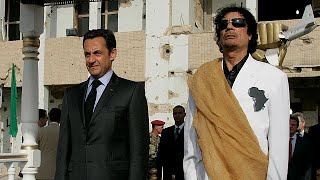 Related Topic(s): Euro; France; Gaddafi; Gaddafi The Playboy; NATO; Sarkozy, Add Tags
Add to My Group(s)
Go To Commenting
The views expressed herein are the sole responsibility of the author and do not necessarily reflect those of this website or its editors.