When we think of the frontiers in quantum physics, the examples that come to mind are the Higgs boson and the quest to populate the particle zoo at the limit of very rare, very heavy, very short-lived particles.

But there's another physics frontier, one that is hardly recognized and doesn't yet attract the press attention or the best minds in physics. Nevertheless, I predict that the next breakthrough in fundamental physics will be in the area of bulk quantum phenomena and not in the physics of single particles.

The very idea of an independent particle is a limiting ideal in quantum physics. Physicists are comfortable talking about "the wave function of an electron", but if you press them, they know quite well that this is an approximate way of speaking. Strictly speaking, there is no "wave function of a particle" but always the "wave function of a configuration." In other words, those probability amplitudes that you hear so much about don't apply to the probability of an electron being in a particular place at a particular time, but rather to the condition of an entire system. Quantum mechanics is essentially relational.

Why do we hear so little of this? Why are all the cutting edge quantum experiments based on properties of single particles? It's because the calculations for multiple particles are so complicated that we don't know how to do them! In classical mechanics, we know how to calculate multiple particle systems, but not in quantum mechanics. In classical physics, calculating three particles is six times as hard as calculating one particle. That's because there are six pairs of particles, each with their own interaction. But in quantum mechanics, calculating three particles is a billion billion times harder than calculating a single particle. That's because the space of all possible configurations is a 3*3*3 dimensional space. A 27-dimensional space is just as hard to work in as it sounds. it's far too complex for even the most powerful computer we have today.

We have adopted the approximation of single-particle wave functions because that's all we know how to compute. Exact quantum computation of a system as simple as a 6-electron carbon atom is far beyond our reach. Hence the physical basis of chemistry and solid state physics is semi-empirical approximation. In other words, we write down a theoretical model, compare the results to observation, and adjust parameters of the model to give us the best fit. All such models depend on the approximation of independent particles, which makes the computations tractable, but also assumes away the massively entangled multi-particle states where interesting new physics may be lurking. 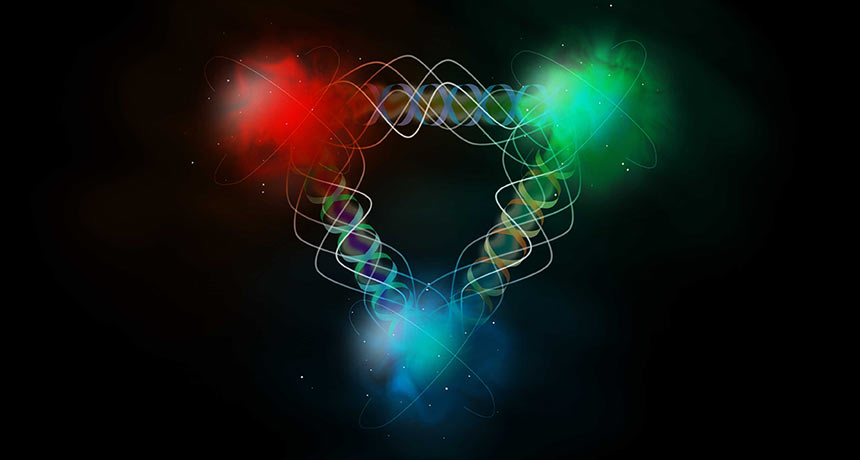 It's not known whether we can do better than single-particle approximations. It's not known whether there are novel multi-particle phenomena waiting to be discovered, because we can't predict them. This is a backwater where few physicists are thinking, and the paradigms have not expanded since Linus Pauling.

If the best minds in physics are stymied by a paucity of high-energy data to guide high-energy theory, perhaps they would find appropriate challenges that are just as fundamental in a quest to understand multi-particle phenomena that doesn't depend on single-particle approximations.

Related Topic(s): QUANTUM; Quantum Consciousness, Add Tags
Add to My Group(s)
Go To Commenting
The views expressed herein are the sole responsibility of the author and do not necessarily reflect those of this website or its editors.