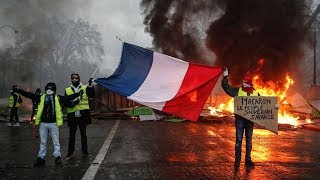 Paris is Burning! Macron and the EU are the real casualties of the Yellow Vest protests!
(Image by YouTube, Channel: Dr. Steve Turley)   Details   DMCA
>

French people are standing up for their rights and speaking out for many others around the world who are sick at the injustice of capitalism. None more so than people of Western states who have had to endure decades of economic austerity while a tiny elite become ever more obscenely wealthy.

In addition to the irrational malign distribution of wealth that capitalism bestows, Western states -- that is, the oligarch-serving politicians -- spend and waste inordinate financial resources on militarism and waging criminal wars.

For the fourth weekend in a row, the French public have taken to the streets of Paris and other major cities to demand economic justice. They also want President Emmanuel Macron to resign. Macron has so far kept his usual aloof silence on the protests, leaving it up to his prime minister Edouard Philippe to placate the angry nation.

Bringing the country to almost a standstill by blocking transport links and fuel supply, the French have demonstrated "people power" and what can be achieved when we organize for our rights.

Macron's government has caved in to scrap plans for tax hikes on the transport fuel. Those proposed price hikes is what triggered ordinary people's fury, donning the now symbolic "yellow vests" that all drivers in France are obliged to carry in vehicles for safety reasons.

The French public say the new taxes would hit their livelihoods. Macron claimed the new fuel levies were for raising government funds in order to pay for transition to a more ecologically sustainable society.

However, ordinary citizens point out that Macron -- whom they disparage as "president for the rich" -- recently abolished taxes for the very wealthy. That giveaway could have been used instead by the government to fund whatever green projects it is planning.

Macron's administration is also planning major tax reductions for big business and corporations. Again, that move shows the elitist priorities of this president and his ministers. The Élyse'e Palace is intent on making the majority of working people pay for social changes, rather the rich class who could easily afford it.

In addition, the French state spends about $50 billion a year on military. If that expenditure was, say, halved, then there would be no need for austerity and arbitrary cuts in public services and welfare.

The French extravagance on military is typical of all Western states and NATO members in particular. If they slashed their militarism, then other countries like Russia and China would also be able to reduce their military budgets, which are maintained out of defensive posture owing to the aggressive stance of Western states.

The French yellow vest movement appears to be at a momentous turning point. It could go either of two significant directions.

Already, the Macron government has capitulated over its brazen tax burdens on ordinary citizens. There is a sense that the elitist president and his administration are teetering to stay in office. For the French people their protest movement has gone beyond fuel levies. They are questioning the entire neoliberal capitalist system, and why they have been made to endure decades of economic exploitation and oppression.

Related Topic(s): Capitalism; Democracy; Demonstrations; Economy; France; French President Macron; Injustice, Add Tags
Add to My Group(s)
Go To Commenting
The views expressed herein are the sole responsibility of the author and do not necessarily reflect those of this website or its editors.