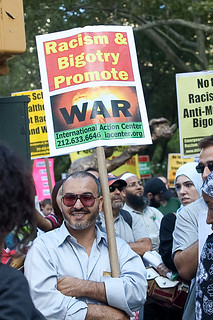 The rally was organized by a Phoenix man, Jon Ritzheimer, a proud atheist who says he is a former Marine who fought in the Iraq War and claims that Islam is a violent religion. He led about 250 people who carried pistols, assault rifles, American flags and drawings of the Prophet Muhammad to the Islamic Community Center of Phoenix.

A counter rally that took place at the same time by another group was called a "love rally" to show the world that Arizonans respect the right of people to practice their religion in peace.

Phoenix police estimated about 500 protesters showed up, roughly 250 on each side.

Those who said they supported Ritzheimer arrived at a nearby park Friday afternoon before taking bikes and cars to the mosque around 6 p.m. Some waved American flags and showed drawings of prophet Mohammed to media.

There, they were met by a crowd of people, many of whom did not belong to the mosque, holding signs reading phrases such as "Love not Hate." One group from Redemption Church in Tempe arrived dressed in blue and lined up in front of the mosque. They said they wore the color to be a peaceful presence.

The anti-Islam rally faced a setback earlier in the day after the bar where a planned after-party and the judging of the controversial "draw Muhammad" contest was to take place closed its doors for the night. The sign on Wild Bill's Saloon in Phoenix read: "Out of respect for our community, our customers, and our employees - Wild Bill's Saloon will be closed this evening. Thank you for your patronage. We will see everybody back here tomorrow."

The organizer encouraged attendees to bring weapons to ensure that no one interfered with their First Amendment rights. Several people, many wearing fatigues, showed up at the rally with assault rifles. The anti-Islam rally included skinheads and a man wearing a T-shirt bearing Nazi SS symbol.

According to the Daily Beast, a few hours in, one protester in a pastel pink tie-dye tore pages from a Quran and stuffed them in her mouth while the college student next to her threw the rest of the book on the ground, screaming into a megaphone: "You do not need this book, this book of lies, this book of hatred! Look Muslims, look at your book, it's been ripped, it's been defiled--you are pigs, you are phony Muslims."

Self-proclaimed "patriot" Jon Ritzheimer billed the anti-Islam rally as "Freedom of Speech Rally," in response to an attack outside a controversial Prophet Muhammad cartoon contest on May 3 in Garland, Texas. A security guard was shot when the two men, Elton Simpson and Nadir Soofi, opened fire with assault rifles outside the contest to draw cartoons of Muhammad. An on-duty police officer shot and killed both gunmen. The Islamic Community Center of Phoenix is the mosque that Simpson and Soofi reportedly attended for a time.

The Texas caricature event was hosted by anti-Muslim activist Pamela Geller who is the President of the American Freedom Defense Initiative. Her group is classified by the Southern Poverty Law Center as an anti-Muslim hate group:

"Pamela Geller is the anti-Muslim movement's most visible and flamboyant figurehead. She's relentlessly shrill and coarse in her broad-brush denunciations of Islam and makes preposterous claims, such as that President Obama is the "love child" of Malcolm X. She makes no pretense of being learned in Islamic studies, leaving the argumentative heavy lifting to her Stop Islamization of America partner Robert Spencer.

"Geller has mingled comfortably with European racists and fascists, spoken favorably of South African racists, defended Serbian war criminal Radovan Karadzic and denied the existence of Serbian concentration camps. She has taken a strong pro-Israel stance to the point of being sharply critical of Jewish liberals."

To borrow Salon writer Heather Digby Parton, Geller is a fierce anti-Muslim extremist. Her goal is to cleanse the Western world of Muslims in much the same manner Slobodan Milosevic wanted to cleanse the Balkans of its Muslim population. On her website, she promoted a British activist's solution to that country's Muslim migration: