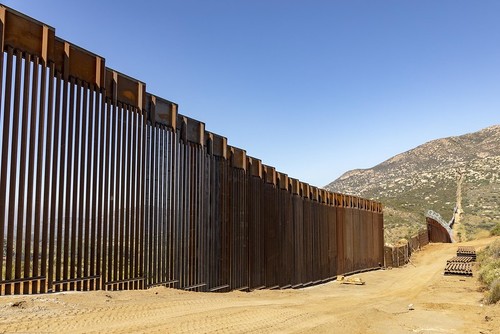 Back in 2016, presidential candidate Donald Trump promised that Mexico would pay for his proposed border wall. Turns out Mexico wasn't interested, so Trump eventually resorted to declaring fake emergencies and illegally misappropriating money from the military budget.

He's spending tens of millions of taxpayer dollars per mile on a barrier that, Samuel Lovett of the Independent reports, migrants are scaling with $5.30 ladders (when the wind isn't blow it over for them, making ladders unnecessary).

Yes, based on the price of rebar at a local hardware store on the Mexican side of the wall, $5.30.

What a refreshing lesson! No matter how much money politicians like Trump spend trying to restrain and impoverish the people they stole it from, those seeking freedom and prosperity find ways to win through -- and to do so for far less.

The wall was always a dumb and evil idea.

Dumb, because it was never going to "work." The US has 95,500 miles of border and coastline. If people want to get in, they're going to get in, even if every member of the armed forces and every sworn law enforcement officer in the country is re-assigned to nothing but "securing the border." The only reliable way to keep people out is to turn America into such a crappy place that nobody wants to come here. Which, admittedly, is something our politicians are always hard at work on.

Evil, because even if it DID "work" the result would be less freedom, a slower economy, and worse lives for everyone on both sides of it. Capital -- including "human capital," aka labor -- naturally flows to where it can be most profitably invested. If that flow is impeded, we're all worse off.

Well, not all of us, I guess. The corrupt politicians doing the impeding, and their crony corporate welfare queens, make bank at the expense of the other 99% of us. Which is as good an explanation as any, and better than most, for Trump's wall fetish.

Those $5.30 rebar ladders are, a huge practical benefit to their direct users. But they're of double benefit -- practical and political -- to the rest of us.

As a practical matter, the immigrants who come over, under, around, or through the wall make our lives better.

As a political matter, the ease with which they're exposing Trump's multi-billion-dollar boondoggle for what it is makes it less likely that future politicians will waste our money on similar idiocy.

Related Topic(s): Mexico Wall; Trump, Add Tags
Add to My Group(s)
Go To Commenting
The views expressed herein are the sole responsibility of the author and do not necessarily reflect those of this website or its editors.