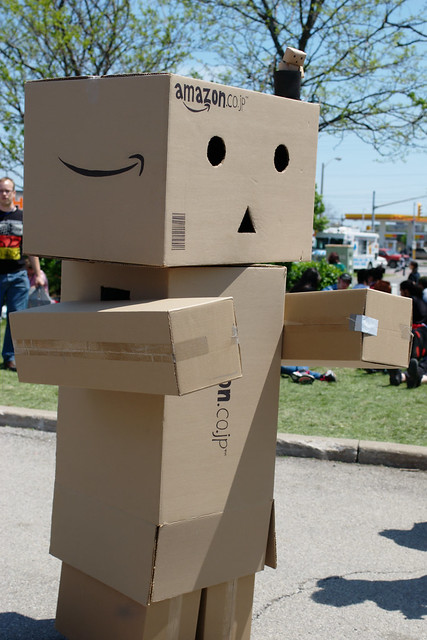 Hunting and Gathering at the Center of Empty Fulfillment

"When an Indian village became too deep in its own filth, the inhabitants moved. And we have no place to which to move."

- John Steinbeck, Travels With Charley: In Search of America (1960)

Worldwide there are some 185 Amazon Fulfillment Centers (FC), in North America, Europe, Asia, Oceania, and South America. The fulfillment centers are everywhere. They employ 1.2 million people, many of them casual or part-time. All of them expendable.

At least that's the way many employees, ex- and present, have expressed their perceived value vis-a-vis the Jeff Bezos corporate ethos: Make money, lots of it, and even more during a pandemic, with so many 'shut-ins' looking for deliverance, and more fulfillers required. One guy interviewed called his Minneapolis FC workplace an "existential shithole." A Time piece shows protesters there holding up a sign that reads: "We are humans, not robots."

Similar disgruntled sentiments have been expressed at other location in the world: In England, ex-workers were angrythey were forced to piss in bottles, got docked points for talking or being sick ("three strikes and you're out"), were frisked for stolen goods like common crims, suffered job insecurity, and, in Rugeley Amazon was bussing in a force when angry coal miners in blackface refused to work for them. In Melbourne, Oceania, more bad news for the corporate image. In an ABC news report, one identity-protected worker, Amazonian 1 (presumably a sinuous female), whinged, "I feel dehumanised," and another, Amazonian 2 sooked, "They would drill ideology into you every day. They'd try and brainwash you ...." It's a leit motif: We're not robots. And won't salute that Bezos German helmet to die for!

It's common for people to express fear going to their FC workplace. There are whispers that Jeff Bezos may be a cult figure and that the pre-shift pep talks may be just the beginning of a new scientology. In a Medium piece, the writer, who got himself hired to go undercover to see what working at Amazon's like, said each shift starts off with workers "huddling together" and answering rah-rah. Our medium writes: