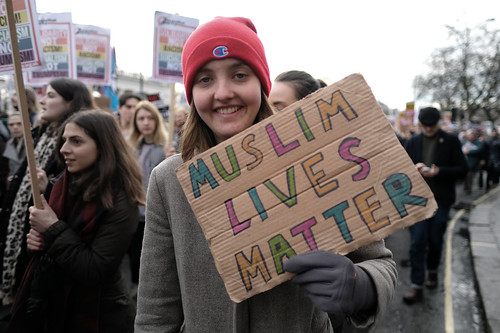 Two officers sought me from within a crowd at the Seattle-Tacoma International Airport. They seemed to know who I was. They asked me to follow them, and I obliged. Being of Arab background, often renders one's citizenship almost irrelevant.

In a back room, where other foreigners, mainly Muslims, were holed for "added security," I was asked numerous questions about my politics, ideas, writing, children, friends and my late Palestinian parents.

Meanwhile, an officer took my bag and all of my papers, including receipts, business cards, and more. I did not protest. I am so used to this treatment and endless questioning that I simply go through the motions and answer the questions the best way I know how.

My first questioning commenced soon after September 11, 2001, when all Muslims and Arabs became, and remain, suspect. "Why do you hate our president," I was asked then, in reference to Bush.

On a different occasion, I was held in a room for hours at JFK International Airport because I had a receipt that revealed my immortal sin of eating at a London restaurant that served Halal meat.

I was also interrogated at an American border facility in Canada and was asked to fill several documents about my trip to Turkey, where I gave a talk at a conference and conducted several media interviews.

A question I am often asked is: "what is the purpose of your visit to this country?"

The fact that I am an American citizen, who acquired high education, bought a home, raised a good family, paid my taxes, obeyed the law and contributed to society in myriad ways are not an adequate answer.

I remain an Arab, a Muslim and a dissident, all unforgivable sins in the new, rapidly changing America.

Truthfully, I never had any illusions regarding the supposed moral superiority of my adopted country. I grew up in a Palestinian refugee camp in Gaza, and have witnessed, firsthand, the untold harm inflicted upon my people as a result of American military and political support of Israel.

Within the larger Arab context, US foreign policy was felt on larger scale. The invasion and destruction of Iraq in 2003 was but the culmination of decades of corrupt, violent American policies in the Arab world.

But when I arrived in the US in 1994, I also found another country, far kinder and more accepting than the one represented -- or misrepresented -- in US foreign policy. While constantly embracing my Palestinian Arab roots, I have lived and interacted with a fairly wide margin of like-minded people in my new home.

While I was greatly influenced by my Arab heritage, my current political thoughts and the very dialectics through which I understand and communicate with the world -- and my understanding of it -- are vastly shaped by American scholars, intellectual dissidents and political rebels. It is no exaggeration to say that I became part of the same cultural Zeitgeist that many American intellectuals subscribe to.

Certainly, anti-Arab and Muslim sentiments in the US have been around for generations, but it has risen sharply in the last two decades. Arabs and Muslims have become an easy scapegoat for all of America's failed wars and counter-violence.

Related Topic(s): Hate-Racism-Bigotry; Injustice; Muslims, Add Tags
Add to My Group(s)
Go To Commenting
The views expressed herein are the sole responsibility of the author and do not necessarily reflect those of this website or its editors.