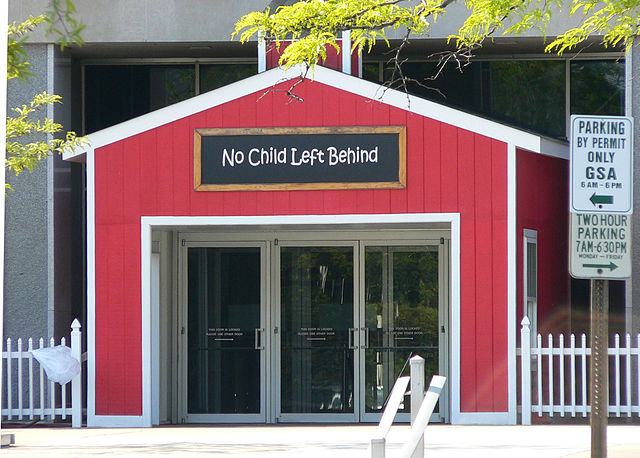 The Budget and Accounting Act of 1921 requires the president of the United States to submit a budget proposal to Congress for each fiscal year. Congress isn't required to honor that proposal. In fact its budget resolutions and actual appropriations seldom reflect presidents' requests very closely. But there are always fireworks over the request anyway.

President Donald Trump's proposed budget for FY2018 calls for a 13% ($9 billion) cut to the US Department of Education versus 2017's discretionary funding.

That may sound like a big big hit to your kids' schools, and the usual suspects would like you to think it constitutes a gutting of "public" (read: government) education in America, but there are a few things to keep in mind when thinking about it.

First of all, according to the National Center for Education Statistics, total government spending (at all levels) on elementary and secondary education in the US came to $634 billion for the 2013-2014 academic year. Additionally, Americans spent $517 billion on postsecondary education, the bulk of it through government, that year.

Keeping in mind that those numbers have likely gone up, not down, in the intervening years, and that state and local spending will probably continue to increase, a 13% cut to the US Department of Education would in reality be at most a reduction of only eight tenths of one percent in total US education spending. Calling that a tempest in a teapot demeans tempests and teapots. This disturbance is more like dropping a grain of salt in a shot glass.

Secondly, there's a good case to be made that federal education spending cancels out any positive effects of state and local spending rather than boosting them. As former New Mexico governor and Libertarian presidential candidate Gary Johnson notes, "[t]he Department of Education grants each state 11 cents out of every dollar it spends on education. Unfortunately, every dollar of this money comes with 16 cents of strings attached. States that accept federal funding lose five cents for every dollar spent on education to pay for federal mandates and regulations, taking millions of dollars out of the classroom." And don't forget that that 11 cents started out as a 13 cent deduction from your paycheck.

Finally, although the federal government spends more than twice as much per student on education today as it did when the department was created in 1980, student performance remains, at best, stagnant.

After 40 years, it's reasonable to conclude that the US Department of Education is a failed experiment. Its budget should be cut by 100% -- turn out the lights, send the bureaucrats home, sell the buildings and equipment -- not by a mere 13%.

But we know that's not going to happen, don't we? This isn't about education. It's about politics. It's not about teaching kids to read and write and calculate. It's about buying votes from special interests with taxpayer dollars . I predict that the department's FY2018 budget will be larger, not smaller, than its FY2017 budget.

If we want decent educations for our children, the solution is complete separation of school and state.

Related Topic(s): Budget Cuts; Department Of Education, Add Tags
Add to My Group(s)
Go To Commenting
The views expressed herein are the sole responsibility of the author and do not necessarily reflect those of this website or its editors.