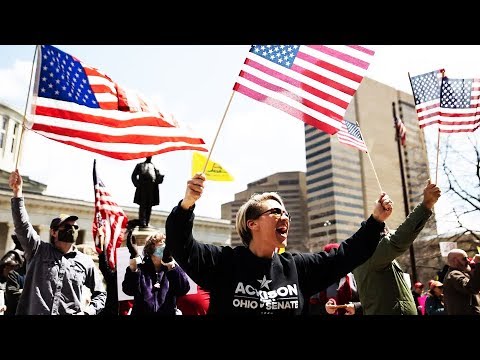 While Trump pumps his private gestapo into cities like Portland and Seattle, Ohio's homegrown fascist legions launched a blitzkrieg of their own.

On Saturday, July 18, about a thousand heavily armed militia members, white nationalists and Trump supporters showed their lack of color at a statehouse rally in downtown Columbus.

The "Stand for America 2020" gathering grew out of a series of anti-mask actions that have plagued the state. Their low point came with a very loud, very public attack on Dr. Amy Acton, the state's former Secretary of Health.

As the TrumpVirus pandemic exploded, Acton called for a statewide shutdown. She was backed by Republican Gov. Mike DeWine, who got nationwide plaudits for taking definitive action against the spread of the disease. DeWine's support for Acton is widely credited for saving numerous lives. The state has since grown more lax in its anti-virus efforts, leading to a spike in sickness and death.

But the Buckeye right wing was not impressed. Heavily anti-semitic public attacks were launched against Acton, who is Jewish. A swastika was painted on the Statehouse and signs straight from the Third Reich were present showing a rat with a yarmulke with the words "The Real Virus." Acton's home in suburban Bexley was attacked, requiring 24/7 protection from the state police. Finally she resigned, prompting dozens of supportive "Dr. Amy Acton Fan Club" yard signs to pop up throughout the town.

The attack on Acton came in the wake of brown shirt-style assaults on signature gatherers working to overturn an atomic bailout. Last year the gerrymandered Republican legislature rammed through a billion dollars in subsidies for two atomic reactors on Lake Erie. Owned by the bankrupt Akron-based FirstEnergy Corporation, the two old nukes are among the world's most dangerous. Davis-Besse, near Toledo, has suffered a long series of terrifying near-catastrophes while Perry, east of Cleveland, was the first US reactor damaged by an earthquake.

When bailout opponents began circulating petitions to put a repeal on the ballot, they were physically assaulted by hired "blockers." The unprecedented thuggery went unopposed by local or state police. The referendum failed to get on the ballot.

But this month the FBI indicted Ohio House Speaker Larry Householder for using $60 million in bribes to get the bailout through the legislature. With the national media widely covering the biggest recorded political bribe in Ohio history, DeWine called for rescinding the "tainted" bailout. He also asked Householder to resign. But the rotund Speaker has thus far refused, and its not clear when, how or if the bailout will actually be reversed.

To cap things off, on July 18 Ohio's fascist movement staged its Stand for America 2020 rally on the statehouse steps in Columbus. of semi-automatic rifle carrying and pistol bearing "patriots" shouting "Give me liberty or give me death!" Death was more likely as the state of Ohio Health Department reported 20 deaths from the virus that day and 1,679 new cases. Each side was armed, although the Anti-Racist Action and Black Lives Matter counter-protester contingent was heavily out-gunned, but there was no shoot-out.

White supremacists were plentiful. The Proud Boys provided security, Three Percent Militia were present, people flashed the white supremacist "OK" hand sign, and a young man carried a sign saying "Racism does not exist" while wearing a "White History Month" T-shirt. A Proud Boys' security vest included a "RWDS" patch -- short for "Right Wing Death Squad." Boogaloo Boys wearing Hawaiian shirts and carrying weapons tried to join the Anti-Racist Action/Black Lives Matter counter-protest but their presence sparked conflict as to which side they were on.

The strategy of the white supremacists at this rally was one of a popular front. They were united in supporting Trump and opposing masks, but white supremacists logos were not as visible. One counter-protester observed, "Those symbols are no longer necessary to those people because they have been replaced by pro-Donald Trump flags, Confederate flags, militia insignia and Hawaiian shirts -- but above all, sadly, by the flag of the United States of America -- which together with the word Freedom in certain hands and in certain mouths are equivalent to the most abject fascist symbols."

The event had an eerie feel invoking the late Weimar Republic when there were street clashes between the left and the right-wing white supremacists. So bizarre was the gathering of nearly a thousand armed right-wingers that the British Daily Mail covered the event in an article titled: "Hundreds of anti-mask protesters protected by armed militia and bikers gather at the Ohio statehouse saying face coverings are 'propaganda' and holding 'I will not wear someone else's fear' signs."

An open battle between the forces of the alt-right and the ARA appeared almost inevitable. In some ways, the anti-maskers are similar to Holocaust deniers. A certain anti-intellectualism pervades their analysis and the presence of signs denouncing George Soros gave it a tinge of anti-Semitism. As outlined by Hofstadter in The Paranoid Style in American Politics, numerous conspiracy theories touted on signage and in speeches at the rally displayed disbelief in science and the threat of the virus.

Related Topic(s): Anti-masks; Conspiracy; Holocaust; Masks; Nukes; Ohio Politics; Racism; Theories, Add Tags
Add to My Group(s)
Go To Commenting
The views expressed herein are the sole responsibility of the author and do not necessarily reflect those of this website or its editors.