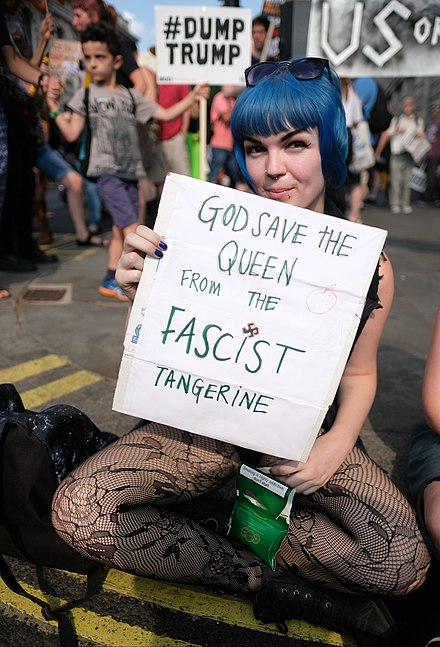 As is well-known, "fascism" is a word that is being applied with increasing frequency to Trump and various policies and personages of his administration. Authorities ranging from Madeline Albright to Michelle Goldberg to Roger Cohen to Paul Krugman have used the term and have been using it for quite some time. I published my first column on Trump and fascism, "Is it Hair Trump or Herr Trump?" in late 2015. I noted at the beginning of that column that already at that time the Trump/fascist matter was being raised. My most recent column on Trump and fascism appeared back in February.

As time moves on the matter is becoming ever more serious. As is well-known over the course of his 3½ years in the White House Trump has revealed himself to be: a) a person who has little (and that is being generous) understanding of the U.S. Constitution and its bedrock principle of the Separation of Powers (developed for it by the brilliant James Madison); which b) feeds his drive to authoritarianism which of course is how he ran a multi-billion (if you can believe him at all on the figures) dollar corporation; c) a rock-solid racist; d) a master user of both The Big Lie and the little lie techniques; e) a man who has lived his life surrounded by enemies, either real or of his own making. ("Enemies of the State/people," real or imagined, are always an element of fascism.) Of course, of this list of personal characteristics it is the drive to authoritarianism which makes a Trump-in-the-Presidency after Jan. 20, 2021 such a prime candidate to establish a fascist regime to govern what then would become the United States of America in name only. But before considering how a fascist state might arise under Trump, let us consider what fascism is.

As I have said in previous columns, fascism is a system of political economy through which, without the participation in any way of the governed, a capitalist ruling class controls all the elements of the State Apparatus which in turn maintains control over the means of production, exchange, and distribution for the benefit of that capitalist ruling class. In sum, it can be defined as:

"Under fascism, there is a single, all powerful executive branch of government, in service of a capitalist ruling class that controls for the most part the functions of production, distribution and exchange. In the structure of the government there is no separation of powers. Thus, there are no de facto independent judicial or legislative branches of government, at any level. There is no independent media. There is a single national ideology, based on some combination of racism, misogyny, religious bigotry, authoritarianism, ultra-nationalism, homophobia, and xenophobia. There is a state propaganda machine using the big and little lie techniques. There may be a full-blown dictatorship, a charismatic leader, engagement in foreign wars, and the use of the mob/private armies/the police/various intelligence services/and when necessary the military to enforce the control of the ruler, the ruling Party, and the ruling class."

Central to fascism is the Authoritarian State, not headed by a hereditary monarch. (A 20th century variation of this form was found in Japan, with the hereditary Emperor who was the head of state. But he was not the head of government and had only ceremonial powers. Functionally the State was a fascist one, as per the definition above, operating for the benefit of the capitalist ruling class.) Of course, there had been authoritarian states for millennia but with very few exceptions they were ruled by hereditary monarchs. The first modern state to be headed by an authoritarian ruler who was not a monarch was post-World War I Hungary. In 1919, following a failed communist revolution, Miklos Horthy, a former Admiral of the Austro-Hungarian Empire, was designated as the sole ruler ("regent") of the new post-World War I nation of Hungary by the then Habsburg (post-Austro-Hungarian Empire) King. The other fascist rulers of the inter-war period are of course much better known: Hitler, Mussolini, Franco (Spain) and Salazar (Portugal).

Based on his record, should by one means or another Trump would remain in the Presidency after 12:01 PM on January 20, 2021, the United States will become, in one form or another, a fascist nation with a functionally authoritarian government as defined above. But the central question for the United States now is how would we get from here, now, to there, then.

Since the establishment of what is known as "parliamentary democracy" in capitalist countries, beginning in the late 18th century, capitalist ruling classes have, for the most part, been able to maintain control of their state apparatuses (? apparati) through "democratic means." As I put it in a previous column on this subject, the "ruling class" is:

"that collection of owners, high-level administrators, and bankers/financiers that controls the major structure and functions of the economy of a nation, and through the exertion of various forms of power (including force when necessary), its political structure and functioning as well. In the modern industrial world, for the most part they do this through the mechanism of political parties and elections."

The key phrase in the paragraph above is "for the most part." In what are generally called the "advanced capitalist countries" there has been the appearance of democracy. But more importantly, the capitalist ruling classes have been able to maintain their control of the state apparati --- and as noted maintaining the control of the state is the central element in maintaining the control of the nation and its capitalist structure --- because to a greater or lesser extent they have been willing to share at least some of the fruits of capitalist production --- known in Marxist terms as "surplus value" ---with the non-owners of the means of production. Historically, in the 20th century, capitalist ruling classes have turned away from the "democratic forms" only when their control of means of production, distribution, and exchange has been seriously threatened by seriously socialist/communist movements (which are nowhere near coming into existence in the United States).

In the United States right now there is a major split in the ruling class over how to maintain its control of the state. One sector clearly wants to turn to authoritarianism, which of course over time would be accompanied by all of the other features of fascism. They would rather have a much more competent leader than Trump, but as in poker, you plays the hand you are dealt. That wing of the ruling class is of course represented by the Republican Party (also known as the Trumpublican Party©).

The other ruling class wing, which believes that it can maintain state control better through sharing more of the surplus value that results from production with the non-owners, is represented by the Democratic Party. For the last 40 years or so, as is well-known, it has had two wings. The dominant one has been the "neo-liberal" (really quite reactionary) wing lead by the Clintons. Joe Biden is the last nationally-known member of that wing. The "progressive," Old New Deal, wing has been most prominently led by Bernie Sanders. His wing, sometimes also called "social democratic," Republican propaganda to the contrary notwithstanding is clearly not "democratic socialist" [that's another topic], and Bernie has made that clear. It is what I have called the "New Deal on Steroids." Facing Trump and the frank-fascist threat the two branches have come together to produce a rather remarkable document called the "Biden-Sanders Unity Task Force Recommendations."

On the list, hardly a red recipe for socialism, as you would think it is if you listened to Fox"News" and the Congressional Republicans, it includes such features as: an expansion of the Affordable Care Act (although not "Medicare for all"); significant criminal justice reform at the Federal, state, and local levels; accompanied by an end to the (mythical) "War on Drugs" and the "school-to-prison" pipeline; a major program to deal with global warming (although not as expansive as the "Green New Deal;" vastly reformed immigration and asylum policies, including a permanent solution for the DACA program; major reforms for the unemployment insurance system; a national public health and economic program to deal with the consequences of what I call the "Trumpidemic2020©"; finance-banking-real estate system reforms to deal with race-based inequities in all; student-debt relief; income-related free access to public higher education; a $15-per-hour minimum wage; and "other."

As I said, this is hardly a socialist program. It is not even a "socialist" program. It is simply a reform-capitalist program that would bring the U.S. up-to-speed with the advanced capitalist countries in Western Europe. The real struggle that is now occurring is between the two wings of the ruling class: the one that thinks that it can maintain control of the state apparatus, and so maintain its control of the means of production, distribution and exchange, better through such a program, and the other that thinks that things are getting away from it, and so they should go to some form of fascism now, even if means swallowing, once again, the man who was once the head of the world's largest corporation, Exxon-Mobil, once called a "f_____g" idiot. But of course, he is their idiot.

This battle will be waged primarily with money --- pouring it into campaign at the Federal, state, and local levels --- through the application of influence on various politicians in both parties, some of which will be public, much of it not, through direct advertising (as in The Lincoln Project's advertising campaign), and if necessary post-election through the courts.

As I have said previously, Chief Justice John Roberts could become the single most important person in the history of the United States to date. In his confirmation hearing, he famously referred to his role on the Court as "calling balls and strikes." If the call is between renewing a liberal-democratic approach for maintaining the control of the capitalist ruling class over the U.S. state apparatus versus the imposition of fascism to do so, that call will become not only the single most important one in U.S. history. But further, in terms of its implications for the possible rampant continuation of global warming unchecked, perhaps the single most important balls-strike call in the history of the world.

Steven Jonas, MD, MPH, MS is a Professor Emeritus of Preventive Medicine at StonyBrookMedicine (NY) and author/co-author/editor/co-editor of over 35 books. In addition to his position on OpEdNews as a "Trusted Author," he is a Senior Editor, (more...)
Related Topic(s): Class; Class Politics; Class War; Democracy; Fascism; Fascist; Propaganda; Racism; Ruling Elites; Trump; (more...) Trump Against Climate Change; Trump Against Democracy; Trump And Barr; Trump Attacks Joe Biden; Trump Campaign; Trump Idiot-in-chief; Trump Moron; Trump Racist, Add Tags  (less...)
Add to My Group(s)
Go To Commenting
The views expressed herein are the sole responsibility of the author and do not necessarily reflect those of this website or its editors.