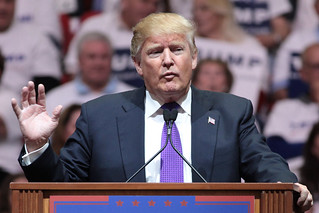 "I, Donald J. Trump, am calling for a complete and total ban on Muslims entering this country until we can figure out what is going on" (cheers and applause). And this statement came after calling Mexican immigrants rapists and murderers and promising to build a wall between the U.S. and America which, of course, Mexico would pay for (more cheers and applause).

The most disturbing aspects of the rallies in which these statements have been made are the eerie similarities to the rallies that we have on film which Hitler held in Germany during the late 1920's. The racist and xenophobic rhetoric and the amazingly excited response of a large group of Americans, coupled with a crudeness never before seen in a Presidential candidate (Megan Kelly bleeding; Carly Fiorina's face, and more), should be a fair warning to us all. There is a segment of our population that is utterly fascist, and it is more than just fringe groups like the KKK.

What makes it even worse, is that Trump supporters are low-information voters for whom the facts do not matter -- they will vote on their emotions and the few hot-button issues -- issues that relate to their irrational fears and the need to scapegoat. And Trump's argument plays right into this demographic. As Robert Paxton, a leading historian and expert on fascism, said during a recent interview with Slate Magazine:

'The argument is very clear. Like the argument of Hitler and Mussolini that the existing government is weak, and therefore, we must have a government that is appropriate to the grandeur of America. The portrayal of Obama as weak, which is astonishing considering the degree to which Obama has used military power".

A Question of Leadership

Above all, we look to a President to be a leader of all Americans, and that effective leadership has traditionally involved a decorum, a rational intelligence, and a set of behaviors that are above the common "fray." When a candidate sends out angry tweets at 2:00 a.m., with distasteful and disgusting comments about those who oppose him, that is not leadership -- it is sandbox fighting. And as a recent Washington Post editorial pointed out:

'Anyone -- we're tempted to say any moron -- can grab a torch and run in front of the mob. What takes talent is what you might call political anger management: to identify legitimate complaints and turn them in a constructive direction, on behalf of a governing prescription. Mr. Trump, with his simplistic demands for a massive tariff on Chinese imports, or his insistence that the Mexican government is deliberately sending criminals to the United States, shows no sign of possessing such a capability. He shows no sign of acknowledging the need for it.'

Hitler and Mussolini "grabbed torches" and ran in front of mobs too.

The Republican Establishment Falls In Line

This week, Trump had a much touted meeting with Speaker of the House Paul Ryan. According to some, Ryan's purpose was to explain the basic tenets of conservatism and to provide a civics lesson on the Constitution, so that Trump understood what he really could and could not do were he to become President. The fact that this meeting should even have to take place is frightening. And, while Ryan has still not publicly endorsed Trump, many other party leaders have.

Perhaps the saddest, and most frightening, endorsement came from John McCain -- a respected war hero, a respected maverick senator, who has broken with his party on many issues in the past. This is a man whom Trump insists was not a war hero, but only a captured soldier, and said so publicly. This is a man who has fought against torture all of his political life, now endorsing a candidate who publicly relishes it and would re-institute it in even stronger ways than during the Bush-Cheney years. What must it take for a man to swallow his most valued principles and endorse this hateful creature?

Moderate political leaders in Germany did the same thing, once they realized that Hitler was going to win an election.

Patrick Cole is an entrepreneur and freelancer. He is also a contributing blogger for several websites. Patrick loves self-education and rock music.
Related Topic(s): America Freedom To Fascism; Donald Trump; Donald Trump; Stop Trump Movement, Add Tags
Add to My Group(s)
Go To Commenting
The views expressed herein are the sole responsibility of the author and do not necessarily reflect those of this website or its editors.

American's Need to Stand Together: Hillary Clinton's Remarks on The Orlando Shooting

Fascism in America -- Donald Trump's America, That Is