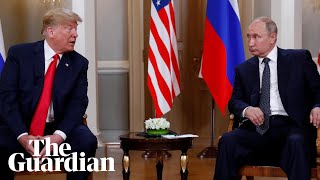 Trump winks at Putin at start of Helsinki summit Donald Trump appears to wink at Vladimir Putin during a photocall in the Finnish capital on Monday. The US president tells his Russian counterpart: 'I really ...
(Image by YouTube, Channel: Guardian News)   Details   DMCA

Since Trump's summit with Russian President Vladimir Putin on Monday it's become all Trump all the time-that's if one sees and hears the corporate MSM.

Of particular "importance" to the New York Times was Trump now saying he'd "misspoken". He now believed Russia interfered with the US election. How does he now know this? Actually he doesn't. Apart from accusations, assertions and allegations there's not been an iota of evidence presented of Russian interference. Guess what? There won't be, ever.

Yes there's Mueller's ongoing investigation since May 2017, the indictments of 12 Russians, the members of the intelligence community saying Russia colluded in the election. Actually there were 3 members making "allegations" of Russian hacking into DNC servers. One each from the NSA, CIA and FBI. "All handpicked analysts that gave no attention to forensics." The FBI didn't perform any independent forensics. The alleged "hack" was really a "leak", copied on a storage device "at a speed that far exceeds an internet capability for a remote hack. The copying was performed on the East Coast of the United States."This from a letter directed to the president of the United States by "Veteran Intelligence Professionals for Sanity. [1]

Now the corporate MSM never published that letter because it didn't fit with the narrative of blaming Russia and Putin for interfering with the election. Better to keep the masses distracted with allegations, assertions and accusations serving as "evidence" when there actually isn't any.

Because in the US-and let's get this straight-when it comes to the MSM providing "evidence" that's not necessary when "allegations" can be made that serve the same purpose.

As in there's a gas attack in Syria. The White Helmets claim to the western media it was President Assad who authorized it, Trump reacts, calls him an "animal" then sends missiles attacking Syrian government installations. Of course there's no mention of any "evidence" supporting the assertion. As in the White Helmets being funded to the tune of $millions by the US and Britain or they're found only in al Qaeda controlled areas, these jihadist mercenaries located in the area where the alleged gas attack occurred that have stores of chlorine gas in their possession and lastly the need for an independent investigation by chemical weapons experts to visit the scene, take "evidence" and then conclude what it was and who is responsible-which could take weeks to discover.

That doesn't happen anymore. If it's done it's after the fact. Trump immediately accessed blame and ordered retaliation for the "alleged" gas attack. Assad "allegedly" gassed his own people-"evidence" be damned.

The thing is we're supposed to be kept "informed" by our free Press. But we're not informed. One would think we should be treated as if we're critical thinking adults. Instead we're treated as juveniles, fed misinformation, distortions and lies, given videos of "alleged" gas attacks stage managed by actors meant to look like an attack. This is offensive.

Yet this is where we have come. Hollywood even gave an Oscar to the White Helmets last year making the big screen just another complicit MSM enabler giving lies and distortions to the people.

Now it's all about Trump. His reversing himself after cozying up to Putin has the Repubs-sans Senator Rand Paul-becoming apoplectic over his comments with Putin at their joint news conference.

That maybe detente with Putin and Russia may have been accomplished by Trump at this summit is absolutely lost in the murky fog generated by our MSM.

It's as if Trump was just being another Neville Chamberlain appeasing Putin who Hillary Clinton compared to Hitler? Again that's where we have come; falsely juxtaposing history with the present .

Retired. The author of "DECEIT AND EXCESS IN AMERICA, HOW THE MONEYED INTERESTS HAVE STOLEN AMERICA AND HOW WE CAN GET IT BACK", Authorhouse, 2009
Related Topic(s): Trump And Putin, Add Tags
Add to My Group(s)
Go To Commenting
The views expressed herein are the sole responsibility of the author and do not necessarily reflect those of this website or its editors.