Joan Brunwasser: I just checked: You and I have been talking pretty regularly since 2007, with a dozen interviews under our collective belt already. Our most recent interview took place shortly after the mass killing in Pittsburgh in late October, 2018. And much has happened since then. This week, you wrote another powerful piece: Bernie's Assault on Our Cliche of Greatness. Apparently, the debate in South Carolina got your juices going. How come? In what way?

Bob Koehler: It wasn't the debate per se. I only watched bits and pieces of it, Most of that evening I was still researching this week's column. My juices were already flowing because of what seemed like a swell of media animosity toward Sanders. Chris Matthews had made that idiotic remark on MSNBC, comparing the Sanders victory in the Nevada caucus with the Nazi invasion of France in 1940 -- that's what really set me off. It connected with all the media red-baiting of Bernie the socialist, like there was this effort out there from the power centers of the status quo to poison not just the Bernie Sanders campaign but progressive values and beliefs about the nation's future. The South Carolina debate happened to be that night and it fueled my outrage. Actually, it wasn't just outrage. The amazing thing was that his -- our -- political vision wasn't being marginalized any longer.

JB: Flesh that out a bit, please, Bob. What political vision? What does that include?

BK: Well, there are many facets to his vision, including getting the Green New Deal underway, along with universal healthcare and the cancellation of student debt, but the vision I felt emerging and gaining traction in this election season was primarily related to foreign policy. His quote in the debate, that "it might be a good idea to be honest about American foreign policy" -- and then referencing our CIA-administered overthrow of national leaders in Iran, Guatemala and Chile -- really gave me a rush of adrenalin. I've been feeling helpless, hopeless and desperate since the '70s, since George McGovern's defeat, about the militarists' stranglehold over U.S. foreign policy. Could it be we're finally finding the power to loosen that grip?

JB: There are a lot of forces out there that are united in opposition to anything or anyone threatening to "loosen that grip". Who are they and how have they been so successful in framing the dialogue to their advantage for so long?

BK: As you say, there are many forces out there, mostly in the background, out of public view. The people who serve these forces are driven not by ideology and belief but " surprise " by money! This is the military-industrial complex, brought to public attention by President Eisenhower as he was leaving office in 1961. Interestingly, he was only sufficiently free to talk about the military-industrial complex as he was giving up his power. During his presidency, the Cold War deepened and the complex had its way to a large extent. As a career journalist, the aspect of the force that is my primary focus is the media, which serves the corporate-military point of view. In presidential races, the media act as bouncers -- so it seems to me -- keeping inappropriate questions and issues out of the discussion. This has driven me crazy for decades. That's why Sanders' honesty in discussing past and present foreign policy issues filled me with hope and amazement. What if the election process wasn't caged by cliches and truisms? Red-baiting is simplistic moralism and it worked in the past, but perhaps we have moved into a new era, and voters, young and old, are more concerned about climate change, economic collapse and nuclear war than communism. 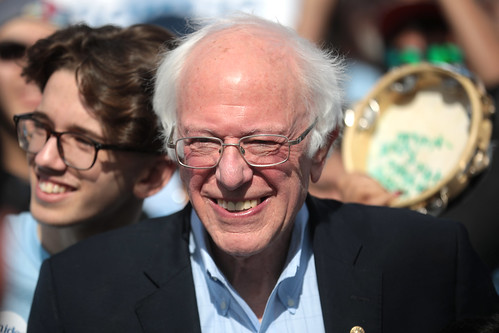 JB: Let's examine the role of the corporate press some more, those "highly paid bouncers" you refer to in your piece. Traditionally, or optimally, the job of the press was to be watchdogs - to stand guard over our democratic institutions, keeping all of us safe. When did they morph into lapdogs for the vested interests: Big Business, the military, the 1%? And why do we somehow presume that they will do their job properly, the way it was intended to be? Why don't we fully realize that they really don't speak for us, care about us or look out for our best interests? I realize that's a lot of questions all rolled into one. Sorry; I got hot under the collar just thinking about it.

BK: I'm sure there was never a time when the media was ideal, the Fourth Estate, a castle of integrity ever engaged in holding government accountable. At the individual level, there have been many great journalists who have done their jobs with skill and integrity, speaking truth to power. But the mainstream media has always had to make money. Yellow journalism was one way. But the media has also been permeated with groupthink -- self-censorship, beliefs that remain largely unquestioned. Many of those beliefs are related to war and foreign policy. As the mainstream media has grown more corporate -- more and more under the control of fewer and fewer wealthy owners -- the groupthink has become, I think, more hierarchical. Powerful military-industrialists who profit directly from our wars also have a say in how the media covers the news. It's hard to hold truth to power when you work directly for the powerful.

JB: So, let's go back to the debates, as a visible and current example of the intersection between media and candidates. What kind of questions do not get asked and should be? And how can you "make" the media focus on topics that their bosses and warlords want to steer clear of? This, of course, goes beyond the debates to include everyday news coverage, or the lack thereof, and that vast area in between: skewing, distorting and other forms of misreporting.

BK: The only answer I can think of is public outrage and a movement surge demanding change. We've started to see this in various ways -- such as the demand for gun safety led by young people after the Parkland shootings, and the growing demand for environmental action. This is how the civil rights movement created real, permanent social change: a ceaseless flow of action, protest, public demand. Eventually the media saw the logic and began reporting on the movement as though it were real and truly mattered -- that is to say, they reported on it from the inside rather than dismissed it from the outside. The political agenda of Bernie Sanders and his supporters is, of course, reported dismissively, from the outside. That's what red-baiting is. There's no simple answer here, only continual effort and nonviolent struggle, along with this important point: Be the media! Big Media no longer has the monopoly on the news flow. Everyone can contribute to it. That's the value of Op-Ed News and other such sites. My belief is that eventually the logic and sanity will be insurmountable and mainstream, corporate media will realize it either has to join or disappear.

JB: Thanks for the shout-out to us at OpEdNews, Bob. Back atcha. It's my opinion that independent, alternative media is the only way to learn what's actually happening, versus the corporate media spin. Let's talk about the Bernie Blackout and the anti-Bernie coverage. The MSM seems pretty united in reporting stories and op-ed pieces decrying Sanders's lack of support, lack of a broad base, unpopular views, etc. etc. etc. How true is that and if it's not, how does one undermine such a well-entrenched meme (or two)?

Related Topic(s): Fair, Add Tags
Add to My Group(s)
Go To Commenting
The views expressed herein are the sole responsibility of the author and do not necessarily reflect those of this website or its editors.