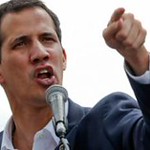 After days of breathless reporting in the US media about public and military support for Venezuelan President Nicola's Maduro collapsing, and about an April 30 coup by presidential poseur Juan GuaidÃ³, we now know the truth: The whole thing was a fraud, staged at the instigation of Washington in hopes that the Venezuelan people and rank-and-file troops would fall for the trick and there was an actual coup.

We also know, from an excellent May 2 report by Michael Fox in the Nationmagazine, that the US mainstream media and its reporters i promoting that dangerous fraud.

Take CNN. In its reporting on the "uprising" announced by GuaidÃ³ on Tuesday, April 30, it ran a video from social media depicting GuaidÃ³, accompanied by opposition leader Leopoldo LÃ³pez, along with some armed uniformed men. The video claimed they were all at the La Carlota military airfield in eastern Caracas, which GuaidÃ³ said had been "liberated." According to CNN, he was addressing "thousands of supporters" while urging the rest of the Venezuelan military to join the coup.

But as Michael Fox and other observers noted, CNN didn't show those "thousands" of supportersbecause there were none.

GuaidÃ³ and his "deserting" soldiers quickly left the scene as government troops headed their way. LÃ³pez later that day sought asylum for himself and family at the Chilean and eventually the Spanish embassy. Two dozen deserted soldiers sought asylum in the Brazilian embassy.

There are two possibilities here: Either CNN's US-based editors were lied to by their Caracas reporters they knew their story of the takeover of a military airfield and of of thousands of protesters on the scene was a hoax.

CNN's standards of accuracy were further discredited by its May 5 claim that:

pressure is mounting on Maduro to step down, following elections in January in which voters chose opposition leader Juan GuaidÃ³ over him for president.

In fact, GuaidÃ³ was not even a candidate in the May 2018 (not January 2019) presidential elections; Maduro won that race with 68 percent of the vote. The New York Times hasn't done any better. On the day of the fake coup, the Times reported, in an unusual unbylined article headed "Venezuela Crisis: GuaidÃ³ Calls for Uprising as Clashes Erupt":

The "newspaper of record" either made no effort to check its reporters' "facts," or went along deliberately with the charade that Washington's hand-picked "legitimate president" GuaidÃ³ was actually speaking from a "liberated" military airfield, when he was really only standing on a highway overpass outside the airfield"

For the rest of this story by DAVE LINDORFF, which is the lead item at Fairness and Accuracy in Reporting, please go to: https://thiscantbehappening.net/failed-coup-actually-a-corporate-fake-news-story-designed-to-trick-venezuelan-soldiers-and-the-public/

Related Topic(s): Corporate Manipulation; Corporate Media; Coup Attempt; Juan Guaido; Venezuelan Coup, Add Tags
Add to My Group(s)
Go To Commenting
The views expressed herein are the sole responsibility of the author and do not necessarily reflect those of this website or its editors.