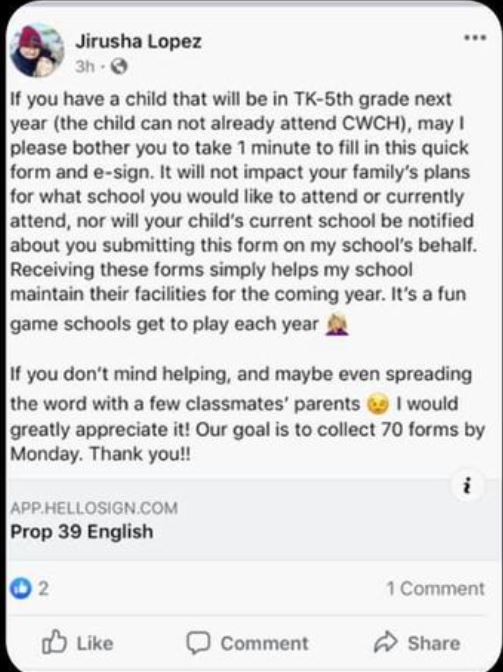 (Image by Jirusha Lopez)   Details   DMCA
hese forms simply helps my school maintain their facilities for the coming year. It's a fun game schools get to play each year."
- Jirusha Lopez, CWC Principal

Under the current interpretation of PROP-39, charter schools are allowed to demand space from public schools to implement their programs. The amount of space that these publicly-funded private schools receive is based on what is supposed to be a good faith estimate of the number of students the charter school anticipates enrolling in its program. This estimate is supposed to be backed up with a list of students who show "meaningful interest" in attending the charter school.

Even after receiving millions of dollars in grants from the Walton Family Foundation, the Citizens of the World (COW) nationwide chain of charter schools continuously demands space from underfunded public schools. In order to comply with these demands, the host schools have been forced to give up space formerly used for parent centers, computer labs, and special education services. These co-location arrangements have been "marked by arguments and acrimony" and have included actual "scuffles between parents" and "physical, conflict".

Contributing to this ill-will is the fact that COW consistently takes more space than it needs. While claiming that its "schools are in strong demand" and that they have "more interest than space", each of their three Los Angeles campuses had fewer students than they projected in at least one of the past four years. The LAUSD has tried to recoup their loss by billing the charter $1,052,428.70 for over-allocated space, but as of November 4, 2020, COW has only paid $96,691.58.

(Image by LAUSD)   Details   DMCA
A Facebook post by Jirusha Lopez, the principal of COW's Hollywood campus, provides some insight into how this charter chain scams the system. While the estimate of attendance is supposed to be based on students who have expressed a "meaningful interest" in the program, Lopez took to social media to ask parents to sign a Prop 39 form even if they had no plans to attend the charter school. In fact, she promised that completing the form would "not impact your family's plans for what school you would like to attend or currently attend."

While Lopez seems to think that the collection of these signatures is a "fun game schools get to play each year", it is actually part of a legal process. By submitting names of students who never expressed any interest in attending the school, COW committed fraud against the students of the LAUSD. The district needs to take this action seriously and hold the charter chain responsible, to whatever the greatest extent possible might be. Additionally, all data provided by COW to the LAUSD needs to be audited by the Inspector General to ensure that there are not any other cases of inaccurate information being submitted. 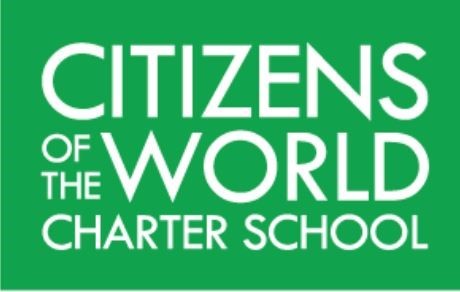 (Image by Citizens of the World Charter School)   Details   DMCA
It should also be made clear that this was not a victimless crime. Contrary to what charter schools say, the spaces taken by charter schools on public school campuses are not necessarily empty. The parents of Shirley Elementary School asked COW to reconsider a co-location of their campus for their latest franchise, as the space taken away would severely jeopardize the ability to provide services that the student body desperately needs. Concern was particularly strong for students enrolled in Shirley's special education program that used classrooms without a full-time teacher assigned to them and were, therefore, considered to be "unused". This request fell on deaf ears and 11 classrooms were taken away from public school students at their neighborhood school.

There is also a cost to students throughout the district. The LAUSD spent up to $527,900 renovating the space at Shirley Elementary for COW. According to reports, the charter chain requested enough space for 269 students at this new location in the Valley. It is said that a fraction of these students actually enrolled. Classrooms formerly used by Shirley to provide vital services will now be either empty or underused. The funding used for the renovation could have been used elsewhere for a greater impact on our children's education.
________________________________