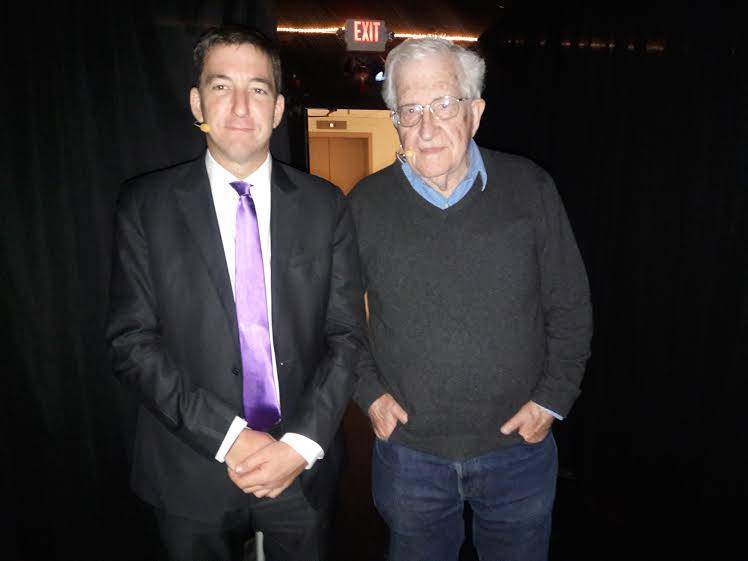 For progressives, to call choosing between Donald Trump and Joe Biden "unappealing" is the mother of all understatements. Unsurprisingly, the topic of lesser-of two-evils (LOTE) voting, a long-time election staple for leftists and progressives, is hotter and more relevant than ever. Bad as our "choices" are, the fate of civilization itself may hang on which "evil" gains the presidency this November.

Given the huge stakes, for both the left and our world, it's likewise unsurprising that two of our most eminent leftist public intellectuals have weighed in on the issue of port-side voting. What is surprising is that Noam Chomsky and Glenn Greenwald, so often united in insight, have come down on opposite sides of the lesser-evil question. Needless to say, neither advises voting for Trump; where they differ is on leftist voting for third parties. Greenwald embraces it, while Chomsky (at least in swing states) insists on voting for Biden to end Donald Trump's intolerable regime.

Again considering the huge stakes, I find the disagreement of two such leftist heavyweights (whose guidance I routinely seek) deeply disconcerting. Of course, it underlines the fact that guidance is merely that; ultimately we must think for ourselves. But in an election of such historic importance, it would be comforting (to say the least) to find two of our most trustworthy leftist guides on the same page. For we ignore either at our peril.

As astute readers likely have inferred, I don't intend to ignore either Chomsky or Greenwald. Rather, I'll give each one his due, but each on a different aspect of LOTE voting. I'll honor Chomsky's advice on swing-state voting for Biden in November's election; in fact, I'll go Chomsky one better by arguing leftists should vote for Biden in every state. But I'll take Greenwald's stance to heart for organizing to pressure Biden--a topic on which Chomsky offers only the vague general advice that we should (to quote the Doobie Brothers) be "takin' it to the streets."

But what we take to the streets is of utmost importance, and I don't find progressives taking that "what" at all seriously. Greenwald is a practiced adept in the recent history of how corporate (or better, "lying warmongering neoliberal") Democrats have relentlessly screwed progressives, especially under Obama and, more recently under Trump, through their "Russiagate" scapegoating operation. So, when he argues that simply surrendering our votes to Biden leaves us with zero leverage to overhaul corporate Dems' longstanding bad behavior, we should listen to such a proven astute observer with utmost seriousness.

Still, I'm utterly convinced we must rid the world of Donald Trump. My reasons, like Chomsky's, focus first and foremost on climate; Trump's climate "policy" suggests a personal vendetta against science (does it make such an egomaniac feel stupid?) best characterized as planet-scale terrorism or the worst crime against humanity ever. And that in the face of an ever-more-dire climate emergency. Indeed, any president with a heavily armed personality cult who risks massive bloodshed by threatening to reject the results of an election needs to be defeated by landslide--if not preemptively removed from office or assassinated--for that reason alone. The urgency of voting Trump out by landslide is precisely why I "out-Chomsky Chomsky" in counseling voting for Biden in every state.

So, seeing the urgency of expelling Trump --preferably by electoral landslide-- Greenwald's cautions about yielding all leverage on "lying neoliberal warmonger" Biden, as we reluctantly yield our votes, stare us down with equal urgency. For me (like Chomsky and RootsAction), our answer lies in relentless pressure on Biden from political movements. But unlike them, I insist those movements must speak "fighting words"--unprecedented angry public truth-telling about how constantly corrupt, unrepentant corporate Democrats have screwed progressives.

What We Mustn't Do: Surrender Our Votes and Our Voice

In my own previous article, I cited RootsAction's campaign to "pressure Biden from day one," but not Norman Solomon's piece supporting it, since that piece hadn't appeared yet. If I weren't aware of RootsAction's prior failures at pressuring "lesser-evil" corporate Democrats--not shameful failures, since they're shared with most progressives of recent decades--the words of Solomon's title would give me sizable grounds for hope. "Reject and elect Biden at the same time" sets exactly the right tone, with "reject and elect" providing a concise, memorable summary of the strategy.

But my own failure (so far) at convincing RootsAction to adopt my own memorable depiction of Biden, "lesser of two enemies," has me deeply concerned that RA isn't taking its own plea to "reject" Biden seriously. What language is more consistent with "rejecting" a politician than branding him your "enemy"? A mere "opponent" is someone you might differ with on one or two issues but expect otherwise to work with on a basis of trust. "Enemy," by contrast, publicly rejects any notion of trust and serves open notice that the politician can win your good will only by high-cost performance. Like "reject," it properly illustrates the language of political pressure.

My discussion of proper political rhetoric may seem like a quibble, but it's my launching point for a much larger discussion about exercising political leverage. My contention, rooted heavily in Greenwald's critique of Bernie Sanders (again, watch this video), is that progressives have consistently-and suicidally--surrendered both our votes and our voice.

Whatever Bernie Sanders' merits--and they are many--in this he's been an especially horrible role model. Perhaps the same delicate political position that forced him to pull his own punches thwarted him from warning us not to pull our own. But with a few honorable exceptions (like all Russiagate critics), we self-defeatingly have. Above all, our major movements--our best megaphones for trumpeting ugly truths the establishment wants suppressed--have not echoed the scathing critiques of astute observers like Greenwald or Chomsky. For how often our major movements have lambasted Democrats over their Russiagate scam or their indefensible support for Trump's Venezuelan coup (meaning not at all), Greenwald and Chomsky might as well have never written. In both cases, Bernie consistently toed the establishment party line.

This surrender of voice along with votes must end pronto if progressives seriously intend to "reject and elect" Biden, forcing him against his (and, more importantly, his donors' ) will to do the right progressive thing. And for those who take heart in Kamala Harris being a weather vane who swings with the political wind, I'd make one crucial point. The chief gusts that blow her are Wall Street and "War Street" (my preferred shorthand for the military-industrial-surveillance complex). Given Biden's visible mental decline, our need to radically distrust "acting president" Harris seems all the more urgent.

And, with their ticket secured, Democrats are clearly already up to their old trick of suppressing progressives' voice (see here and here).