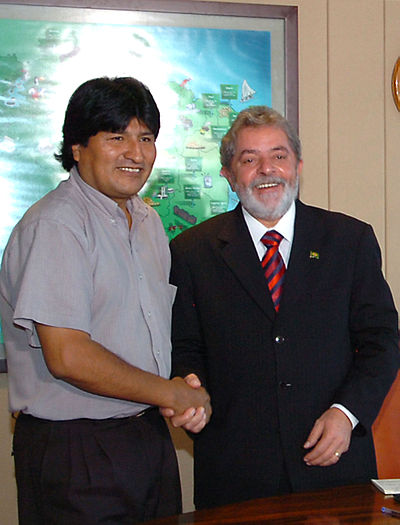 Bolivia's Evo Morales with another popular leftist leader, Lula, later ousted and jailed with US backing (and now freed again)
(Image by (Not Known) Wikipedia (commons.wikimedia.org), Author: Author Not Given)   Details   Source   DMCA

When it comes to politics in Latin America, what initially seems clear is usually anything but.

And when that some complicated political event happens and is reported about in the US, the last place to look for clarity is the US media, which almost universally parrots the Washington line an imperialist one that takes as its premise the so-called Monroe Doctrine that all of Latin America is "the US backyard."

For well over a century, the US has played a corrupting hand throughout Latin America, often well hidden, sometimes in a hard-fisted manner. The military juntas in Brazil, in Argentina, in Chile and in Nicaragua, the overthrow of democratically elected governments in Honduras, in Nicaragua, in Guatemala, in Haiti, in Brazil, Argentina, Uruguay, the failed invasion attempt in Cuba shortly after the successful Cuban Revolution, the brutal civil war in El Salvador and the Contra War against the Sandinista revolutionary government in Nicaragua, the hunt and eventual murder of Che Guevara in Peru, Operation Condor, which tracked and murdered thousands of revolutionaries as the CIA coordinated the reactionary forces of Brazil, Argentina, Chile, Uruguay and Paraguay"

It's an almost endless list, behind which one always finds the US Counter Intelligence Agency, US AID, the State Department and of course, the US military and its School of the Americasstill a training ground for South American fascist military leaders ready to do the bidding of the region's fascist tyrants, or to help overthrow democratically elected leaders unwilling to kowtow to US empire.

So it has been of late as the failed US attempted to crudely overturn the last re-election of President Nicola's Maduro in Venezuela, even to the absurd extent of Washington's ludicrous promotion of Juan Guaidó, a young nobody groomed at Georgetown University, as the "real" president of the country.

And so it surely is in the latest coup by the military and police of Bolivia who have succeeded in driving out of office and into Mexican exile the hugely popular Presidente Evo Morales of Bolivia, after he had just won re-election to a fourth term"

Related Topic(s): American Hegemony; American Hypocrisy; Bolivian Revolution; CIA; CIA Interference; Evo Morales, Add Tags
Add to My Group(s)
Go To Commenting
The views expressed herein are the sole responsibility of the author and do not necessarily reflect those of this website or its editors.