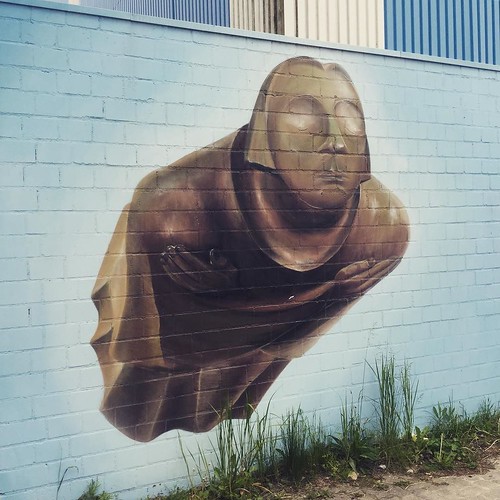 Graffiti at a memorial against fascism and war. At this point in Wedel (near Hamburg) there was a Nazi concentration sub-camp. The graffiti illustrates the sculpture of an suspended angel (.Der Schwebende.) by the german artist Ernst Barlach from 1927, wh
(Image by Matthias Ring)   Details   DMCA

When the world was engulfed in World War II, psychologist Eric Fromm addressed the subject of freedom and authoritarianism in this 1941 book "Escape from Freedom."

He discussed the thought processes involved when man loses his common social structures man experiences feelings of hopelessness. Man looks at his hopelessness and wants to replace it with something, and sometimes looks to authoritarian political systems to replace this freedom. "Escape from Freedom" concentrates on the rise of Nazism in Germany.

Authoritarian structures, or what some call authoritarian democracy, have popped up in democracies as of late. Authoritarian democracy practiced by President Donald Trump in the United States, National Rally Party Leader Marine LePen in France, Russian President Vladimir Putin, UK Independence Party Leader Nigel Farage in the United Kingdom, Prime Minister Viktor Orban in Hungry, President Andrzej Duda of Poland, President Recep Erdogan in Turkey, Prime Minister Narenda Modi of India and President Jair Bolsanaro of Brazil. All of these political leaders combine a nationalism defined by an exclusion of certain racial and/or religious minorities from their views of a good citizen and a skepticism of the interests of other nation-states. It could be said that these movements adhere to a narrow form of nationalism. All of these leaders use the power won in elections to chip away at the institutions of the democratic nation-state like fair elections and the media, as all demonize the media. Unlike 1930's era Fascism and revolutionary Communism, parties out of power aren't outlawed outright. Free speech remains within certain limits defined by the leaders. However, the United States has such a free speech tradition that unreasonable restrictions on speech aren't common as of yet.

The accomplishments of a democratic-republic are many. For one, the form outlasted the above- mentioned Fascism and revolutionary Communism. One of the upsides of the democratic form of government is the ability of the people to drive the government the way they want through the freedom of press and the right to assembly. Both are threatened by the arrival of authoritarian democracy, also called right-wing populism.

In the eyes of Fromm, the one thing that can fight the bad of negative freedom is a non-authoritarian form of positive freedom, or building positive and affirmative structures to replace the old ones. This is possible in a democratic-republic. In his story "Toward a Sino-Hellenic Humanism," writer Michael Lind correctly traces our form of government to the ideas of Humanism. He stated that humanism was the mode of thought that was molded ancient Greece, Rome and China as well as the Renaissance and Baroque eras. Despite differences, humanists of various eras shared some things in common. Lind states humanists shared "a focus on human life, combined with a high degree of indifference toward supernatural and metaphysical questions; an emphasis on practical reason or common sense, as opposed to supernatural revelation, deductive rationalism or individual genius; and a respect for the classical literary tradition embodying the wisdom of the past (as distinct from scriptural tradition from allegedly divine revelation)."

The mentioned advocates of authoritarian democracy draw their support from opposition to globalism. People in individual nation-states lives have changed due to the forces of globalism. Globalism has brought relocation of factory jobs to other countries (via free trade), the ability to find out and advocate new ways of thinking and living common beyond a nation-state's border (via internet) and new residents (via immigration).

What does the arrival of authoritarian democracy (or right-wing populism) do for attempts to contain the dangerous weapons in our arsenal through arms control? We can witness it now. Nuclear weapons are proliferating and attempts to control them are being abandoned through the abandonment of treaties. The success of arms control treaties depends on a level of trust existing between the countries that make them. The nationalism that defines current world politics is not good for arms control.

There needs to be a united front against right-wing populism and what it stands for. Using the internet and social media, already used by authoritarians, should be central to this effort. Some answers can be offered by the libertarian municipalist movement. While parts of the movement are problematic, some portions of libertarian municipalism can be used moving forward. Any humanist can examine literature and accept or reject parts of it based on what can be determined by human reason, as stated by Lind.

Libertarian municipalism is similar to the civic humanism practiced in the Roman Republic and in Renaissance Europe in that it puts humans at the center of change. Like any form of humanism, it puts a lot of emphasis on human concerns, human reason and human action. This means it weakens the claims of authoritarian leaders who want us to surrender our freedom to what they preach.

Debbie Bookchin, a libertarian municipalist, said the movement returns politics to "a moral calling based on rationality, community, creativity, free association and freedom." She also defines the movement as "a decentralized democracy where people act together to chart a rational future."

Naturally, the movement concentrates on the city, or municipal, form of government. Citizens elect neighborhood organizations that pressure municipal politicians on the issues that affect their lives. Issues of all types could be included, including arms control and diplomacy. If citizens advocate for arms control on a local level and municipalities pass resolutions supporting the idea, higher elected officials might take notice and start to control the dangerous weapons in our arsenal because they feel the pressure. Movements would also be recognized by the media which would expose the ideas of the movement to more people.

The organizations behind the Occupy Wall Street movement can serve as a model for a pro-arms control effort. In Occupy, citizens formed organizations, organized and confronted an economic entity that stood in their way. New organizations would make arms control and diplomacy out of the realm of a few highly trained professionals and place them in the hands of the common people, a move that would please any civic humanist. Arms control would become something more intertwined in people's lives. Will our country create a new form of organization based on civic humanism or surrender our freedom to authoritarianism?

Jason Sibert worked for the Suburban Journals in the St. Louis area as a staff writer for a decade. His work has been published in a variety of publications since then and he is currently the executive director of the Peace Economy Project.
Related Topic(s): Dangerous; Diplomacy; Escape; Issues; Story, Add Tags
Add to My Group(s)
Go To Commenting
The views expressed herein are the sole responsibility of the author and do not necessarily reflect those of this website or its editors.

On Geoeconomics, International Law, and Peace

Our Government, Democracy and World Order

The Future of Security