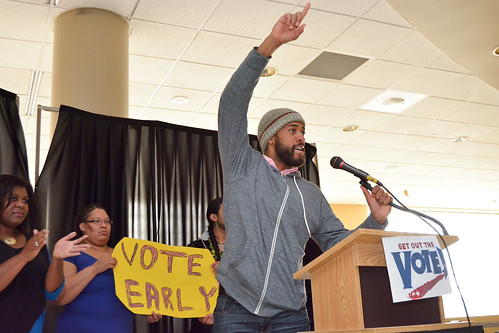 Americans being suckered into focusing on voting for one of the two parties of the ruling genocidal Wall St. plutocracy, US CIA controlled media informs of Yemeni children dying from bombs & starvation knowing its captive audience will not turn against the American killing machine. Once USA-EU loses hegemony, the many nations that have seen their children murdered by USA and European empires will demand justice.

The good people of the murderously plundered Third World should not let themselves be taken in by USA worldwide satellite beamed CIA-fed media prattling on continuously about American democracy during ongoing elections. It has often been pointed out that there really is only one party allowed in the United States, the party of the ruling propertied capitalists, and it has two right wings: Republican and Democrat.

Former US Attorney General Ramsey Clark, once the highest law officer of the USA, who helped write both important civil rights laws, speaks to his fellow Americans clearly,

"We're not a democracy. It's a terrible misunderstanding and a slander to the idea of democracy to call us that. In reality, we're a plutocracy: a government by the wealthy." :

One of the most internationally powerful plutocrats in US history, John Pierpont Morgan, in a candid moment admitted, "Of all forms of tyranny the least attractive and the most vulgar is the tyranny of mere wealth, the tyranny of plutocracy" :

The well respected third president of the USA, Thomas Jefferson, saw the plutocracy coming when he said,"I hope we shall crush in its birth the aristocracy of our moneyed corporations, which dare already to challenge our government to a trial of strength and bid defiance to the laws of our country."

"The current situation in America is by way of being something

Related Topic(s): Capitalism Over Humanity; Elections, Add Tags
Add to My Group(s)
Go To Commenting
The views expressed herein are the sole responsibility of the author and do not necessarily reflect those of this website or its editors.