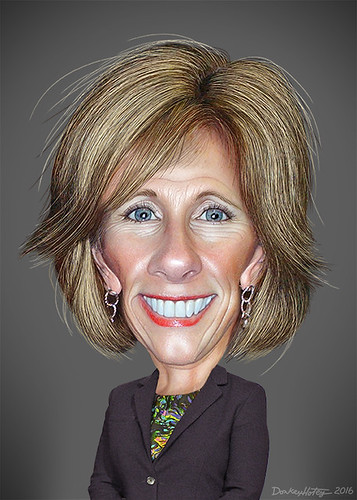 "I'm not sending anyone to jail yet, but it's good to know I have that ability."

"There have to be some consequences for the violation of my order 16,000 times."

That order came during the Obama administration, involving 335,000 former Corinthian College and ITT Technical Institute students whom the federal government determined were eligible under the Borrower Defense to Repayment program for student loan debt forgiveness after the now-defunct Corinthian, one of the largest for-profit college chains, defrauded them.

The Obama administration put in place policies requiring the U.S. Education Department to investigate loan servicing companies' past conduct before the government awarded lucrative contracts. Those contracts were required to include certain consumer protections, such as prohibiting loan servicing companies from cheating federal student loan borrowers, and guiding borrowers through the repayment process.

Once DeVos assumed Education Dept. control after Donald Trump took office, however, she ignored the approximately 160,000 loan forgiveness applications until 80,000 individuals won a class action lawsuit compelling her to stop collecting on their loans.

Garnishing former students' tax refunds and wages despite the court order, DeVos continued collecting on loans, benefiting 102 companies posing potential conflicts of interest, exposing her investments in the very companies from which Obama's student lending policies were meant to protect.

This led Steve Gunderson, president and CEO of Career Education Colleges and Universities, to urge DeVos to defy Moss' order.

Now Judge Sallie Kim ordered the lawsuit against DeVos to go "full-steam ahead" in determining whether the court should hold DeVos in contempt of court.

At a hearing on the department's budget in March, Senator Richard Durbin (D-Ill.) asked DeVos:

"Don't you have a heart? Victim students [are] waiting on your department to give them relief so they can get on with their lives."

Data from the Education Dept. Washington Senator Patty Murray requested shows there are were 158,000 pending claims from last September to December.

The Edu. Dept. did not state it approved or denied any borrower defense claims this year.

Related Topic(s): College; Court Challenge; Court Order; Debt; Education Costs; Education Funding; Lawsuits; Schools; Secretary Of Education, Add Tags
Add to My Group(s)
Go To Commenting
The views expressed herein are the sole responsibility of the author and do not necessarily reflect those of this website or its editors.