It's Tastier Than A Fortune Cookie, But Still Leaves You Hungry For Something More Meaningful

The triumph of Madison Avenue (advertising) is in its ability to take something so frivolous, so inane, so inconsequential and make it into something universally loved and, therefore, marketable. 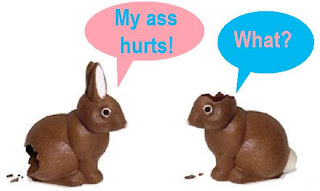 Easter is neither frivolous nor inane. And while the concept of a dying-and-rising god has been used before, it is not inconsequential to those who believe it. No, Easter is a joyous, but solemn event, one that affirms a very strong set of beliefs. It is a time of hope and love through God, man and nature.

A rabbit that magically sh*ts colored eggs is frivolous. It is ludicrous. It is totally inconsequential. It is a totally fake, pastel, rendition of spring without even redeeming pagan qualities. With the exception that he represents the Holy Grail of marketing, the Easter Bunny and his milieu do not serve as anything else but icing on a cake that does not exist. He reigns in chocolaty goodness over self-indulgence while sitting on a golden throne of greed. His history as the symbol of fertility has long given way to second-rate graphics illustrators and Beatrice Potter. In meaning, Santa far surpasses this ill-bred hare.

According to historians, the concept of an Easter Bunny originated in the Alsace part of upper Germany. The tradition of children making "nests" for the Spring Equinox (Easter) whereupon the next day they would find brightly colored eggs was brought over by German settlers to the Pennsylvania Dutch settlements and the nests became "baskets" over time. The parallels to Kris Kringle were not lost to the earliest of Madison Avenue habitues: jolly ole' elf and warm fuzzy bunny, both bear gifts to kids (although it may not be wise to ask where the eggs were previously). The retail season also needs a boost at that time, it being after Valentine's Day in that lull before Mother's Day. And the world loves pastels, so dry goods sales can get rid of those awful cottons nixed by current fashionistas.

So even with all the cardboard fakery isn't it fun to indulge in a little innocence? The operative word here is, I believe, indulge. Easter indulgence actually puts Christmas indulgence to shame: the gifts are mostly superfluous and there never seems to be enough sugar-coating. Once I tried to bring some actual creativity into our family's egg-coloring by purchasing large (very large) blown goose eggs and batiking them so that they could be displayed year round, maybe even on the Christmas tree. The result: some unusual eggs by disinterested artists who didn't want to see another batiked egg for a long time... and the Christmas tree never saw an egg.

"Alright, give us a break, it's just a stupid holiday." That's the point: holidays (as in Holy Days) are meant to commemorate, illuminate, and drench us with meanings we are too busy or too distracted to entertain. They exist to give us visions of our lives, magnify them, understand them. Thanksgiving gives us pause to think about our joys. Valentine's Day helps us to consider those around us. St. Patrick's Day instills ethnic pride whatever the background. Mother's and Father's Days bring us closer to parents. Fourth of July engenders not only patriotism, but pride in our national individuality. Memorial Day helps us remember and New Years' Day helps us forget. Labor Day signals the end of summer and the terror of another school year. And speaking of terrors, Halloween helps us laugh at them. 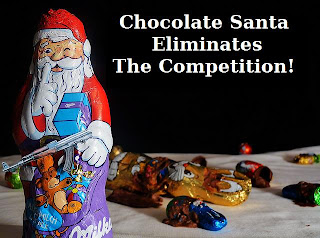 The Easter Bunny holiday not only detracts from the religious holiday, it sucks the meaning out of it like some candied black hole. The image of Christ on the cross being offered a colored egg by the Easter Bunny is funny and shocking at the same time (yes, there is a card for it) but commercialism will always strive for a new low with that fuzzy/furry/white/pink/yellow/lime-green rodent. Maybe the real meaning of Easter and its Bunny is to show us just how off-the-mark we can be with things like holidays.

Then again, maybe there is no meaning to the Easter Bunny because there never was a meaning intended in the first place.

You gonna eat those chocolate ears?

Rev. Dan Vojir is has been writing/blogging on religion and politics for the better part of ten years. A former radio talk show host (Strictly Books " Talk America Radio Network) and book publisher, Dan has connected with some of the most (more...)
Related Topic(s): Chocolate; Christian Right; Christianity; Commercialism; Easter; Easter Bunny; Eggs; Fertility; God; Halloween; (more...) Holidays; Resurrection; Santa Claus, Add Tags  (less...)
Add to My Group(s)
Go To Commenting
The views expressed herein are the sole responsibility of the author and do not necessarily reflect those of this website or its editors.