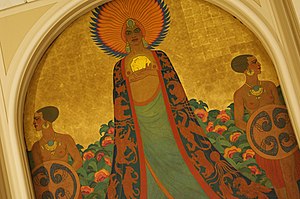 Recently, I came across information that told me that the state of California was named after Calafia, a Black Islamic Queen in a paradisiacal land where there were no men; just lots of unbelievably beautiful Amazonians. Gold, pearls, gems, and lots of other untouched family jewels. Well, I was born in California, and this news was like being knocked over by a feather. Imagine the retrospective irony of an American state named after the Islamic Caliphate!

It turns out that in 1535, Spanish conquistador Herna'n Corte's named the "island" place he saw (the Baja peninsula) after a mythological island he'd been reading about in a romance by "Sergas of Esplandian" by Garcia Ordoñez de Montalvo It was a "terrestrial paradise" referred to as California. It was regarded at the time as a inferior follow-on to the more sophisticated four-part romance that preceded it, Amadis de Gaula, which was written by a different author. The tale is hard to come by.

So, I looked into it and found Edward Everett Hale's less than exhaustive recounting which appeared in the Atlantic Monthly in 1864, and re-published in his volume, His Level Best in 1872. I read and was inspired by this prose rendition to produce my own version in poetic stanzas. It's only loosely based on Hale's text (available at Archive.Com). It's turned into a project I couldn't anticipate -- Fout Parts: 1) The Terrestrial Paradise; 2) Crusade at Constantinople; 3) Return to Paradise Converted; and, 4) Calafia Remembered at a Modern Californian Pot Party.

Queen of the Terrestrial Paradise --

She was tall, exotic, perfumed as spice;

her eyes held the sea, longing, and, of late,

she seemed to listen for its mooned advice.

She stood strong, nearly naked, then she faded