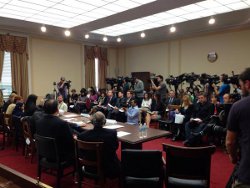 Last month, on national TV, I said that "I am very disturbed by this idea that whenever we see something bad in the world, we should bomb it." Yesterday I felt even more disturbed, when I met some of the victims of that brutal idea.

Yesterday, we made history, a very sad sort of history. I hosted the first Congressional briefing that featured the testimony of drone warfare victims.

A U.S. military drone flew overhead. It bombed them. The grandmother screamed and died. Her body was so butchered that the villagers would not allow her own children to see it. Her granddaughter was permanently injured.

The grandmother joined the 1000 innocent victims of American drone warfare in Pakistan. A list that includes almost 200 children. By most accounts, between 10 percent and 30 percent of drone victims are guilty of nothing but being in the wrong place, at the wrong time.

Yesterday, I hosted the first Congressional briefing with Pakistani drone victims. One broken family got to tell its sad story to Congress, to the world, and now to you. The son of the victim, Rafiq ur Rehman, spoke first. He and his mother lived in a village with no public services, far from any road. He is a teacher. His mother was the village storyteller. In the eyes of the villagers, he said in elegy and in eulogy, she was the string that held the pearls on a necklace. And now she is gone.

His two children also testified. His daughter, who was with her grandmother that fateful day, spoke about her injuries. One of the children said that they used to pray for blue skies, because they were so beautiful. Now they pray for gray skies, because the drones are absent -- temporarily.

They wanted to know why the United States had killed Grandma. I didn't have an answer. But at least I could listen, and learn.

You can, too. Here is a link to our briefing.

Here is where we are at: A person sits in front of a computer screen somewhere in the United States. He has never been to the target area, has never seen it from the ground, doesn't know anyone there, doesn't speak their language, isn't even familiar with the clothes that they wear. Based on what he sees on that computer screen, and whatever else he's got, he launches bombs from a drone aircraft flying in the sky 8000 miles away. The bombs then kill people.

Does that seem like an effective means to prevent attacks on the United States? Seriously? Is it any wonder that so many innocent people die? And should it even be so easy to kill?

The CIA doesn't even admit that it is running a drone warfare program, much less accept responsibility for its innocent victims. The State Department refused to issue a visa to the lawyer for this family of victims from coming to the United States, even though he had visited the United States many times before without incident. The engineers of this machinery of death report from time to time that they claim to have killed the #3 in this sinister organization, or the #7 in that other sinister organization. But they never report on the death of a grandmother in her sixties. Nor do they consider the fundamental truth that such an execution leads to more terrorism, not less.

Momina Bibi is dead. She will not be telling any more grand, poetic and lyrical stories to her fellow villagers. There is no way to bring her back to life, or even to reassemble what's left of the parts of her body. But we can stop it from happening again.

And that's what we're trying to do.

So if you have the time, please watch.

"Blessed be the peacemakers, For they shall be called the children of God."

P.S. You can learn more about this topic and my other work in Congress at CongressmanWithGuts.com.

Rafiq ur Rahman -- a primary school teacher in Pakistan -- will appear at a briefing called by Representative Alan Grayson (FL-09), along with his children Nabila and Zubair. In October 2012, Nabila and Zubair were injured in the same drone strike that killed their grandmother -- Rafiq's mother - while she was tending crops in her garden. This landmark briefing marks the first opportunity for Congress to hear in-person accounts from drone strike survivors. Other testimonies will be given by Robert Greenwald and the family's lawyer Shahzad Akbar (via a representative from Reprieve UK) recounting the horror and immorality of civilian casualties in drone strikes.

Democratic Congressman from Florida's 8th congressional district.
Related Topic(s): Congress; Congressional Committees; Congressional Hearings; Congressional Progressive Caucus; Congressional Reports; Grayson-Alan, Add Tags
Add to My Group(s)
Go To Commenting
The views expressed herein are the sole responsibility of the author and do not necessarily reflect those of this website or its editors.