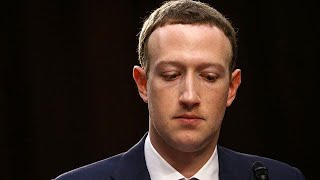 Facebook CEO Mark Zuckerberg testifies before Congress over the company's use and protection of user data in Washington on April 11, 2018.
(Image by YouTube, Channel: euronews (em portugus))   Details   DMCA

For all the raft of unanswered questions or dismissal as a nothingburger, Facebook CEO Mark Zuckerberg's two-day grilling at Capitol Hill hopefully may unleash a serious global debate about our virtual selves.

US politicians, it seems, have discovered the merits of the European Union's General Data Protection Regulation (GDPR). The EU is actually at war with the GAFA galaxy (Google, Apple, Facebook, Amazon) and environs. The question for the US revolves around the immense legal twists and turns on how and what to regulate.

As much as Zuckerberg may have conceded that the industry needs to be regulated, scores of congressmen pressed him on whether Facebook would enforce GDPR for US customers. He dodged the question multiple times, promising GDPR "controls," but never "protection."

An army of savvy lawyers at the Facebook HQ certainly envisaged that regulation might "stifle competition," as some congressmen did not fail to point out. And some, naively, even gave the whole game away, asking Zuckerberg directly what kind of regulation he would prefer.

Capitol Hill may not have noticed that Facebook and GAFA as a whole work pretty much like political parties disguised as companies. The founders/CEOs are major shareholders. Decisions have the imprimatur of a board working as a sort of political bureau. Congress is the shareholder general assembly. And the militants are the salaried mass addicted to a visionary movement.

The whole process runs in parallel with the decline of traditional political parties. Even top counseling comes from the political arena, like former Obama operative David Plouffe, who moved to Facebook from Uber, and Joel Benenson, Bill Clinton's top polls specialist.

And it's certainly very much a political issue how cyberspace trumps actual physical space. GAFA is always looking for nations that offer comparative advantages and privileges to dodge regulation and annoying redistributive fiscal obligations.

That betrays a clear ideological choice. GAFA is all about Ayn Rand-inspired Libertarianism; minimum government and maximum freedom. Surf away from the crashing waves of the state. Regulation is for losers.

Add to it the role of Pluralistic Networks, founded by Chilean Fernando Flores, a former minister of Salvador Allende and co-author, with Terry Winograd (Google's Larry Page's mentor) of a book about Heidegger's influence on information science, redefining intelligence, language and the limits of biology. Here we have Heidegger as the precursor of AI.

One of the big shows in Brussels for years has been the debate on why GAFA refuses to pay taxes. Libertarianism is incompatible with direct tax deductions or regulations. What matters most of all is the philanthropic value of those entrepreneurs and their social importance in creating jobs.

European egalitarian cynics, on the other hand, would describe them as a bunch of moguls bloated by un-measurable hubris praying to a doctrine of sovereign egotism.

Related Topic(s): Data Theft Personal; Facebook; Issues; Mark Zuckerberg; Politics; Virtual Reality, Add Tags
Add to My Group(s)
Go To Commenting
The views expressed herein are the sole responsibility of the author and do not necessarily reflect those of this website or its editors.