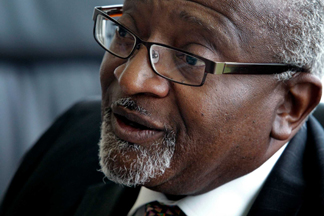 The position drills down on the agenda he has been pursuing for 40 years.

Dr. Bullard was full of optimistic energy. He responded, "I said on January 1, let's make 2021 the year for justice." He referenced the summer of 2020 as an "awakening of sorts," when disparate issues coalesced as people connected the dots between racial inequity, the impacts of COVID, our medical system, and who was getting hit the hardest. The pandemic brought home how marginalized communities were continually in the eye of the storm, an echo of the situation in the environmental realm.

Regarding his council position, Dr. Bullard underscored how vital it was that the Biden-Harris administration had elevated the matter to "the highest level." He noted a "number of people from the Clinton administration" were involved, so that input added to "some institutional memory." He was excited that the group was "intergenerational, with the youngest member being 18 years old."

As Dr. Bullard sees it, the top objective is the commitment to looking at environmental disparities through an "equity lens, using metric tools and mapping" to pinpoint where significant problems are in terms of "urgent needs." It goes beyond pollution and toxic factory sitings. It's an interconnected system of concerns that include "food, water, energy, housing, and transportation justice." Underserved communities must be identified and targeted. This way, they will become the recipients of the appropriate "programs and policies."

Opponents of the Biden infrastructure bill are already denigrating the goal of making roads and transportation more equitable, but the reality is in plain sight. Highway systems for commercial traffic (resulting in higher emissions) have been routed through poorer neighborhoods with fewer resources. Public transportation hasn't been prioritized because more affluent Americans have cars.

Dr. Bullard is not intimidated by realities that can feel overwhelming. "What about the 25%-plus of elected officials in the new Congress who don't believe in the science of climate change?" I asked him.

"We've got to buckle up and fight harder," he told me. Even the January 6 insurrection didn't dampen his aspirations for progress. "I grew up in Alabama and saw a whole state insurrecting!" Dr. Bullard was calm and determined. "We have to organize and mobilize. Everything is converging. Young people are not willing to wait 40 years for positive changes. We have momentum."

There is no doubt that Dr. Bullard is a realist. "We need pragmatic solutions and strategies," he said. "We're not going to get 100% of what we want. But we're not going to leave a huge segment of people behind." He acknowledged the window for action was getting smaller. "There is no magic wand, but we must make frontline communities a priority." He addressed "low-hanging fruit" as a key to getting traction.

"We have to make recommendations so that there is not a continuation of overburdening people in environmental sacrifice zones," Dr. Bullard emphasized. Mentioning the September 2020 Environmental Justice legislation signed into effect by New Jersey Governor Murphy, he offered the following example: "You may have 12 power plants that are now in compliance in a frontline community, but what about the cumulative impact from years of pollution?"

Our conversation shifted to the role of women in the environmental space and the historic appointment of Deb Haaland as Secretary of the Interior. Referring to Haaland as a "change agent," Bullard spoke about the "structural, institutional, and governmental departments" invested in old methodologies and the need for forward thinking. This potential for attitudinal change is critical in responding to the calls of the Indigenous rights movement--which has challenged the history of stolen lands and the present extractions of pipelines and mining on their remaining properties.

Pointing to women of color who have been at the forefront of advocating for family, home, and community, Dr. Bullard conversed about the "matriarchs of multigenerational households, fierce women who are not leaving the struggle to others," and remain in the on the ground fight, raising the level of awareness.

Finally, we spoke about the importance of all children's health and investing in their futures. He was clear in his assessment: "We understand that children form a special group. They're more vulnerable to environmental threats. They need advocates who can take the lead."

The First National People of Color Environmental Leadership Summit took place in 1991. Dr. Bullard stated, "These principles are now all over the globe."

Following Dr. Bullard's career from his first book in 1987 introducing these concepts, it's clear there has been progress.

However, there remains a lot more work to do.