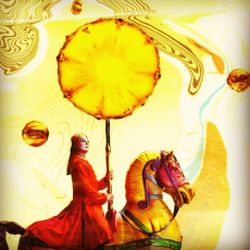 Arrogance And the Horse He Rode in On
(Image by Akemi Ohira)   Details   DMCA
As William Barr mounts his already shame stained DOJ throne to squat on the rear receptacle crusted over with Trump's executive order to defy all Congressional subpoenas, his stream of spying spin, from Russia with Love through a media too lazy to look beyond surface excrement, adds another slick of jaundice to our current seat of government.

By comparison, our 2000 coup d'e'tat aided by the U.S. Supreme Court, and abetted by Reagan's ultra conservative appointee, Justice Antonin Scalia - preemptively striking out Florida's Supreme Court, was more blunt force trauma than takeover by Trump/Pence/Bolton/Mnuchin/Pompeo/McConnell - by a thousand cuts.

Domestic spies heavy laden with Koch and Deutsche Bank dirty laundry, coming in from the cold to warm their feet on ever increasing GOP, boil, boil toil and trouble for, of, by and for the people government the Trump syndicate flips an AG middle finger not just at one co-equal branch but to the entire Land of the Free tree, including Founding roots.

Perhaps another reason to un-elect Donald Trump in 2020, is to be able to walk along 5th Ave without fear of being shot by a President of the United States or at least, deny absolution to Trump's Global and pre-pardons to go as Conservatives amass attack from the female Right flank, in state legislatures' push to pit lower courts against what they expect in a Kavanaugh v. RBG SCOTUS.

Imagine being both poor and female, whether paleface or tanned out of history: post tax cuts for super wealthy, twisting poverty standards to adjust for fewer Americans qualifying for Food Stamps.

The Non-exonerated investigated excommunicating justice from the Department of Justice, now investigating how his private foreign parts got probed without facilitating any hired urinating sources.

Trusting Pharmaceutical Opioid pushers and health insurance ravens is as dangerous as believing in peddlers of fear herding us into desperation that settles for any ol' unqualified leaders. As a result, we're being Saturday Night Massacred, again.

While many well-meaning parents remain whirling under the pressure of those who teach fear of vaccinations, fear of affirmative action and fear of true patriotism: the courage of, first do no harm - even when thinking for oneself, remember America's greatness has always come from collectively caring for the common good.

Repetitive Republican talking points have made an unquenchable cliche' of, I'm not a scientist, so when Science Guy Bill Nye goes ballistic on those who refuse to hear the truth about what they see, is it any wonder that logic is sacrificed on the altar of needing a stimulated political Base?

Smarter to, full stop conservatives trying to pry out of our grasp on reason, the birth of a new onslaught on women's Constitutional rights - eager to clone Alabama, Georgia and Ohio reverberation of eleven Republican dominated legislatures, with their MAGA on, for another round of: the Trail of Tears, Slavery, police beaten Suffragettes, McCarthyism and Jim Crow.

To the peril of America's humanity, we've Right-Winged patriotism, deserted the less fortunate, scorned human kindness, whitewashed dishonesty and betrayed our Constitution so much - finding our way out of the quicksand of a trumped GOP bog seems as insurmountable as defeating a raving, self-aggrandizing, narcissistic, maniacal demagogue, whose practiced charisma incited in an otherwise sane and industrious people, the willingness to allow the slaughter of more than six million human beings.

Change for the better never follows voting against the best interests of union members, small businesses or farmers oppressed by the side effects of violent white supremacists and executive privilege's trade wars against patriotic voters in Pennsylvania, Michigan, Ohio and Wisconsin.

It's not the color Tim Russert emulators paint our States, but the lacquer with which we ourselves stain our souls.

It's descendants of lynch mobs Alt-Rightness wrongly hijacking, do the Right Thing and the vulnerable to quick and easy fixes of false prophets without a plan.