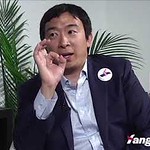 None of the three leading candidates for the Democratic nomination has a chance of beating Trump a year from now. The best hope the Democrats have is Andrew Yang. Don't laugh.

In September 2015, I laid out the reasons why Donald Trump would be the nominee of the GOP and would be elected president in November 2016 if Hillary Clinton was the Democratic nominee in my Daily Kos blog. I was excoriated by the readers of that site for daring to even consider Trump had a glimmer of hope. Six months later, I wrote that Clinton and the Democratic National Committee were using dirty tricks to prevent Bernie Sanders from gaining the nomination. I called her Richard Nixon in drag. That got me blocked from Daily Kos. Two months later, the Wikileaks files proved I was correct.

I mention these things because we are just under a year away from the 2020 election and the same people who are paid handsome salaries to report on and analyze the presidential election are largely missing the point again. So, I go back to the ten reasons to explain why Trump will be re-elected. Some aren't quite as important now that he is the incumbent, so I will add a few more. That's right, there are even more reasons for him to win in 2020 than there were in 2016.

1. Almost everyone who read the first sentence of this piece scoffed. Trump is too...Trump. So? That is why his supporters support him. People scoffed at Ronald Reagan for being Ronald Reagan. People scoffed at George W. Bush for being George W. Bush. Candidates with distinctive personalities resonate with GOP voters. Meanwhile the Democrats have their odd electability test that did so well for them in 2016. Why are they not looking for the candidate who energizes people the most? Have you looked at Andrew Yang's Facebook group?

2. The GOP base has an anti-politician streak stronger now than ever. Mike Huckabee won the Iowa caucuses as a preacher. Reagan and Mitt Romney were chosen because they ignored their gubernatorial stints. The Democrats have Andrew Yang and that new guy available. In these divided times, isn't it possible that Democratic voters also are sick of politicians?

3. The GOP, the party of business and people who think they are going to win the lottery, prefers successful people. Dwight Eisenhower succeeded in war. Herbert Hoover succeeded in business. Failure usually comes when the GOP candidate is just a political success. Even Trump's successful emergence from bankruptcy gave hope to supporters swimming in debt. And Andrew Yang is saying 'screw the lottery, let's give every adult citizen 1k a month.' He has Alaska as a great example how that works. Vote for Yang and feel as though you won the lottery.

4. The GOP establishment was freaking out about Trump in 2015. When they decided to actively work against him, it was clear they had concluded he could win the nomination. Look at the vote in the House of Representatives on an impeachment inquiry. They know impeachment will be a trophy for Trump to hold up to his base. Despite a few GOP candidates entering the dance, the establishment is not going to drop Trump for doing something Hillary Clinton did when she sold her vote on the Iraq War for money from Bush for New York for 9/11 after-effects.

5. Trump has a non-stick surface like the venerated Reagan. His supporters don't blink at what he says. He has the ability to generate support being confidently smug and ridiculously extreme just like Reagan. The three Democratic frontrunners have had more labels stuck on them than the casual separates at Macy's.

6. Does anyone really think Trump's second favorite book is Holy Scripture? Yes. A lot of people will not question the opinions of anyone who says he is guided by God's Word. This has even greater impact when it is a revelation about the candidate rather than something expected. Nothing has put a dent in Trump's standing among evangelicals. Moving the USA embassy to Jerusalem demonstrated he was more supportive of Israel than anyone before him.

7. Reagan was elected because of his personality and oratory (plus a politically-wounded opponent). He asserted that government and the Soviet Union are evil. His opinions were disturbingly unsubstantiated, but he was too charming for most people to critically analyze what he said. Trump has the same qualities. He just substitutes socialists in the Democratic Party for government and Muslims for the Soviet Union. He even shares unnatural hair with Reagan. Bernie Sanders comes closest of the top three to having a stand-out personality, but he comes off as an old doctor telling his patients what's good for them. Andrew Yang shows quite a bit of charisma, especially when he talks about his family.

8. Trump has spent his life selling the Trump brand. He has successfully let the world know what 'Trump' means. The real Trump is out there on Twitter and in the comments to reporters. If people have not stopped supporting him yet, they ain't gonna. Not one of the top three Democratic candidates comes close to being a celebrity candidate. Yang may have it judging from his merchandise.

9. Trump will do anything to win. Anything. He had the skill to outmaneuver the GOP poohbahs. Now, they are supporting him, disregarding logic, facts, and consequences. This is what happens when a political system becomes made up of people whose only objective is to win the next election. Pelosi & friends hew to that electability standard. No Democrat (aside from me and some other nobodies) thought Trump was electable up until he was elected. The Democrats aren't listening to the voters and so they do not have a clue what electable is, again!

10. Hillary Clinton was Trump's dream opponent. For Clinton to beat someone as genuine as Trump, she would have had to do whatever Richard Nixon would do and a bit more. Trump already knows how to attack Biden, Sanders, and Warren. What he can't do is get much traction against an immigrant's son entrepreneur who realized the American Dream and developed something that creates jobs. He can't go after Yang's Chinese heritage since his parents are from Taiwan. There hasn't been a Democratic candidate like him since Jimmy Carter in 1976.

11. The outlook on the economy indicates that if there is a downturn, it isn't going to happen in time to influence the election. Trump takes credit for all the good economic news, as all presidents do. The reason Yang has a chance is that he has based his candidacy in part on trying to ameliorate the effects of automation on workers. Candidates always talk about jobs going overseas, but they never talk about the impact of automation. Yang's perspective will resonate in Trump's base.

12. Trump's foreign policies have had little measurable impact on Americans, although it has had a horrendous impact on the USA's standing in the world. For the most part, Trump's actions have made him look like he is trying to do something, such as engaging North Korea. That may change as the trade war with China continues. But even if he loses that battle, he will sell it as a win and his supporters will agree. The Democrats can't do anything because Americans have grown largely disinterested in international relations and only Biden has any experience. The impeachment proceedings are going to be a reminder of Hunter Biden's poor decision to join that Ukrainian board.