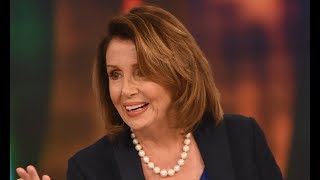 If House Speaker Nancy Pelosi trashes the Constitution by not allowing Jerold Nadler, D, NY, chair of the Judiciary Committee, to begin impeachment proceedings against President Donald Trump, the Constitution will become, in effect, what George W. Bush called it in 2005 "just a go*damned piece of paper."

The crucible is now today, when it appears likely that Trump will declare a state of emergency to usurp the sole authority given to Congress to appropriate funds, all of this simply to satisfy his Captain-Ahab obsession to build a wall on the southern border.

Pelosi is not a profile in courage. She chickened out when the Democrats won back the House in 2006. She would not allow impeachment for reasons both crassly political and personal.

After the life of Casey Sheehan, peace activist Cindy Sheehan's son was squandered in Iraq early in the war and Cindy insisted that Bush explain the "noble cause" for which Casey died, then-Congressman John Conyers, D, Michigan, offered her more sympathy than many of his colleagues did. After Conyers regained his chairmanship of the House Judiciary Committee, he agreed to meet Cindy in July 2007.

Cindy got permission to include Rev. Lennox Yearwood and me at the meeting in Conyers's office in the Rayburn Building. It turned out to be a very instructive experience, the upshot of which seems likely to re-occur today as President Donald Trump abuses the Constitution in as flagrant way as imaginable. Consortium News published my account of that meeting. It may be worth a re-read -- see below...

What do Rep. John Conyers, D-Michigan, chair of the House Committee on the Judiciary, and President George W. Bush have in common? They both think they can dis Cindy Sheehan and count on gossip columnists like the Washington Post's Dana Milbank to trivialize a historic moment.

Conyers, on the other hand, was dripping with pretence as he met with Sheehan, Rev. Lennox Yearwood and me Monday in his office in the Rayburn building. I have seldom been so disappointed with someone I had previously held in high esteem. And before leaving, I told him so.I'll give this to President Bush. He makes no pretence when he disses. He would not meet with Sheehan to define for her the "noble cause" for which her son Casey died or tell her why he had said it was "worth it."

Throwing salt in our wounds, he had us, and some 50 others in his anteroom arrested and taken out of action as the Capitol Police "processed" us for the next six hours.

As we began our discussion with Conyers, it was as though he thought we were "born yesterday," as Harry Truman would put it. With feigned enthusiasm he began, Let's hold a Town Hall meeting in Detroit so we can talk about impeachment. Get out my schedule; let's see, we need to hear from everyone about this.

Been there, done that, I reminded the congressman.

On May 29, 2007, Col. Ann Wright and I were among those who flew to Detroit for a highly advertised Town Hall meeting on impeachment, because we were assured that John Conyers would be there.

That Town Hall/panel discussion was arranged by the Michigan chapter of the National Lawyers Guild less than two weeks after the Detroit City Council passed a resolution, cosponsored by Conyers' wife Monica Conyers-calling for the impeachment of Bush and Vice President Dick Cheney. We had hoped that Monica's clear vision and courage might be contagious.

I had to remind the congressman that he did not show up for the Town Hall.

Apparently, that incident was of such little consequence to the congressman that he had completely forgotten about it. Small wonder, then, that he has apparently forgotten the oath he took to protect and defend the Constitution of the United States from all enemies, foreign and domestic.

Selective Alzheimers? I don't know. What was clear was that he had forgotten a whole lot.

Ray McGovern works with Tell the Word, the publishing arm of the ecumenical Church of the Saviour in inner-city Washington. He was an Army infantry/intelligence officer and then a CIA analyst for 27 years, and is now on the Steering Group of Veteran Intelligence Professionals for Sanity (VIPS). His (more...)
Related Topic(s): CIA; Democrats; Impeach Trump; Nancy Pelosi; Vips, Add Tags
Add to My Group(s)
Go To Commenting
The views expressed herein are the sole responsibility of the author and do not necessarily reflect those of this website or its editors.