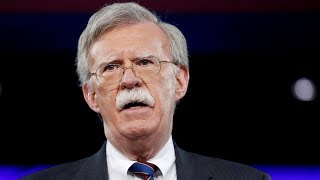 President Trump's hawkish choice for national security adviser doesn't need the Senate's approval. That may be lucky for him.
(Image by YouTube, Channel: The New York Times)   Details   DMCA

The purpose of the team is to produce a false flag event that will provide an excuse for Washington to attack Iran. As the Israelis are the most competent member of this team, the speculation is that Israel will shoot down an American aircraft or attack a US Navy vessel, and Washington will have the presstitute media blame it on Iran. In other words, a revival of the Northwoods Project that the US Joint Chiefs presented to President Kennedy in hopes of setting up a US invasion of Cuba.

The plot seems already to have been set in motion. Both Bolton and acting Pentagon secretary Patrick Shanahan have announced their detection of a "credible threat by Iranian regime forces. We call on the Iranian regime to cease all provocation. We will hold the Iranian regime accountable for any attack on US forces or our interests."

To be clear, the "threat" and the "provocation" are not identified. But they are somehow happening even though no news services and no governments anywhere in the world, excepting Washington, Israel and Saudi Arabia, are aware of the "escalatory action from the Iranians."

Bolton has sent an aircraft carrier strike group and bomber task-force to quell the unidentified "threat."

It turns out that the Iranian threat to America was uncovered by -- you guessed it -- Israel.

The Iranian foreign minister, Javad Zarif, has denounced the false accusation against Iran as fake news to justify an attack on Iran.

CNN furthered the false flag event by quoting "unnamed officials" confirming that the US had "specific and credible" intelligence that Iranian forces were targeting US forces.

Possibly this orchestration is designed to provoke Iran into ceasing to comply with the Iranian nuclear agreement. The US attempted to wreck the agreement by pulling out of it, but Iran and the other governments that signed the agreement -- France, UK, Germany, Russia and China -- have continued to respect it. If Washington can provoke Iran into pulling out of the agreement, Washington can isolate Iran by depriving Iran of Russia and China's support and Europe's opposition to the US sanctions.

Possibly Russia, China, and Europe will not be misled by Washington's ploy and will stick with Iran, as war with Iran is in no one's interest except the rulers of Israel and Saudi Arabia.

The shamelessness and audacity of John Bolton are extraordinary. After decades of Washington and Israeli false accusations and orchestrated events to overthrow governments in the way of Ziocon agendas, here we witness it all over again.

Success breeds success. If the Russian and Chinese governments do not have sufficient awareness of reality to let the warmongers in Washington know that there will be NO attack on Iran, Russia will be next, and then it will be isolated China's turn. Russia and China cannot escape Washington's hegemony by allowing it to succeed.

If Bolton and Netanyahu's plot succeeds, Iran will be the last step before nuclear war.

Related Topic(s): Dogs Of War; Donald Trump; Donald Trump And Isreal; Iran; John Bolton; Secretary Of State Mike Pompeo; Warmongers, Add Tags
Add to My Group(s)
Go To Commenting
The views expressed herein are the sole responsibility of the author and do not necessarily reflect those of this website or its editors.