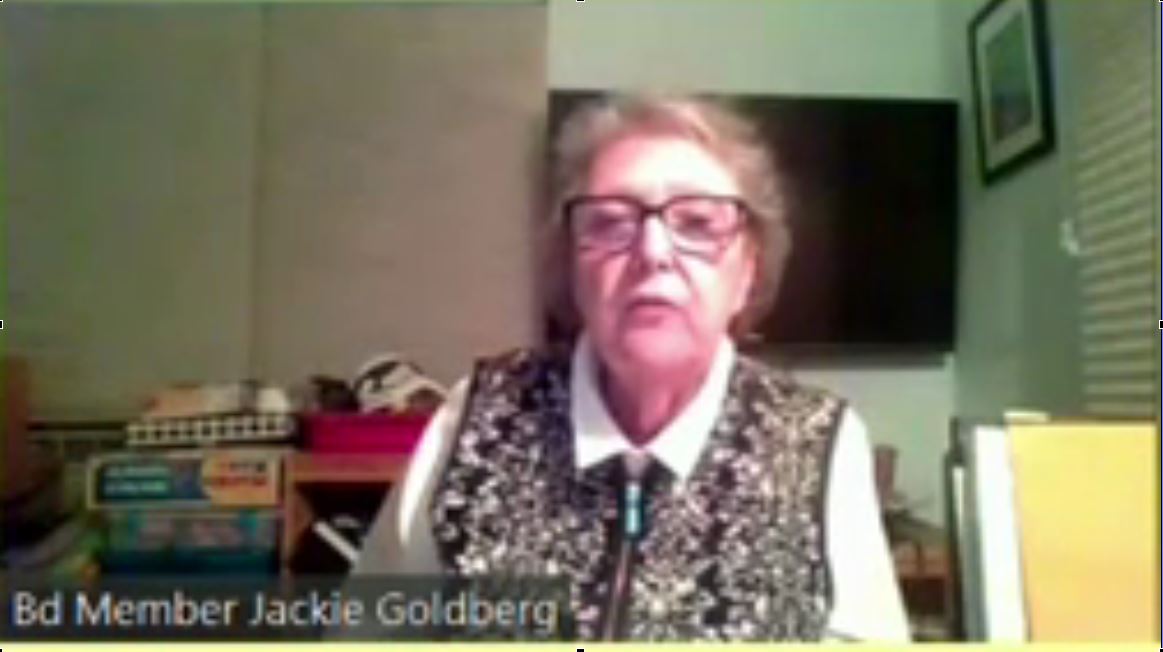 (Image by LAUSD)   Details   DMCA
tps://youtu.be/GHsFQpneeIo?t=7">Have all of those been rectified, have they been cured, have they been fixed so that they meet our standards?"
- LAUSD Board Member Jackie Goldberg

Fresh off securing eight million dollars in funds meant to protect jobs, Granada Hills Charter School is now seeking $1.1 million from the federal government to construct nine new shade structures on their Zelzah campus. Since this facility is owned by the Los Angeles Unified School District (LAUSD), Granada and the district must amend the Sole Occupant Agreement (SOA) for this campus in order for the school to start construction. Before the board could vote on these changes at its last meeting, I provided the following public comment:

I'd like to begin by congratulating Mr. Schmerelson on his victory. Scott, you are a good man who has always put students first. You did not deserve the lies and bigotry thrown your way in this campaign by the charter school industry. They spent almost six and a half million dollars on this campaign and they did so to eliminate oversight on projects such as this one.

To say it bluntly, Granada Hills Charter has a poor history when it comes to construction projects. As noted in the paperwork, "GHC previously made several alterations to the [Zelzah] Campus without Los Angeles Unified consent." This resulted in a Notice of Violation (NOV) that was issued on March 3, 2017, which was over three years ago. The safety problems that were detailed in this violation should have been rectified by now!

The NOV stated that the projects "were a risk to the health and safety of your students, staff, and other individuals." Yet, parents were never properly notified that a NOV was issued.

In addition to the NOV, a lawsuit accused the school of not conducting proper asbestos abatement when carrying out maintenance projects. The suit alleged that Granada fired an employee for insisting that the safety of the students be made a priority.

I don't care how high a school's test scores are, they are a failure if they lose sight of the fact that the health and safety of students are paramount. No additional construction should be allowed on this campus until all the previous issues are corrected and the district is convinced that new work will be performed properly.

It is also concerning that "GHC will maintain ownership rights to the Project and may be allowed to remove the improvements at the termination of the SOA." These shade structures are being built with federal funds for the benefit of the students who use the campus, whether it is used for a public or a charter school. The district should retain the right to determine if the structure remains upon the termination of the SOA.

In the interest of the students, this proposal needs more specificity before being approved by the board.

One final note: Given Austin Beutner's past affiliation with Granada, he should have recused himself from the process.

During the discussion of this item, Board Member Jackie Goldberg did ask the Facilities Services Division if all of the violations had "been fixed so that they meet our standards?" The answer that she received was a lesson in how to appear to respond to a board member's inquiry without actually providing the required information:

Goldberg followed up to ensure that the school was curing the problems. The reply:

"They have cured. They are not in violation by occupying unapproved space."

Hidden within this word salad was the fact that after almost four years, Granada has not fixed all of the safety issues detailed in the Notice of Violation. While the direct danger to students might have been temporarily eliminated by keeping them away from the unsafe construction projects, the conditions still exist after Granada has spent at least $230,000.00 attempting to fix them. As a landlord, the LAUSD should be concerned that property it owns was modified without its permission, that shoddy construction was performed and that Granada has, thus far, been unable to bring these projects up to code.