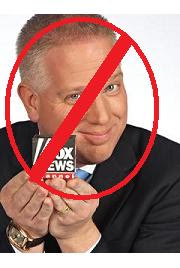 For I was drench'd with ooze, and torn with briers, . . . And, all one rag, disprinced from head to heel. --Tennyson.

Yes, Tennyson's "disprinced" can certainly be taken as a metaphor for Glenn Beck in all his glory, so the pun was definitely intended by me. It's ironic, though, that Pat Conroy's novel, The Prince of Tides, also deals with dysfunctional people. The Sunday July 18th shoot-out on California's Interstate 580 showed just how much of an effect Glenn Beck has had on those who cannot cope with life. Byron Williams of Groveland, CA was a convicted felon on parole who lived with his mother far from town. His mother, Janice, was a woman who kept a large stash of high-powered weapons because she thought

(SF Weekly)that armed resistance against our government was inevitable -- but Williams allegedly made off with the stash because he felt that time was now.

Williams had been out of a job for two years since he was released from prison and felt ostracized from everyone - even by his own church. His mother repeatedly told the media that he had railed against

"the way Congress was railroading through all these left-wing agenda items." And that he would sometimes scream at the TV because he watched a lot of news programs.

After he left his mother's house, a scene on California's I-580 near Oakland unfolded as it would have in any B-movie: CHP officers noticed the white Toyota pickup speeding erratically down the highway, followed and signalled for the driver to pull over. Williams, armed with a small arsenal and wearing body armor, ,proceeded to shoot at the officers. Eighteen minutes, 60 rounds, ten officers, and three serious bullet wounds later (a total of six rounds were fired into the body armor), Williams was subdued and taken to the hospital where he was reported in stable condition.

"He's ruined his life because now he is going back to prison and he's ruined mine because he is my only son," [Janice] Williams said.

There were two targets that Byron Williams had in mind when he said that he wanted to "cause a revolution": the ACLU and the Tides Foundation. The ACLU, of course, is widely known and is one of the "demon-spawns" of the Right wingnuts everywhere. The Tides Foundation, however, is less notable and has not been focused upon by the mainstream media.

Several political observers have suggested that recent Fox News coverage of the Tides foundation may have provided some of the motive for the attacks. In particular, Glenn Beck mentioned the Tides Foundation in 29 separate episodes of his show, referring to it as "a socialist conspiracy" which was "assembling an army." Other pundits observed that, aside from holding similar political views, there was no evidence that the shooter was acting as a result of watching Beck's show.

It may be time for the righteous assassination defense to kick in.

"The deluge of 'Tiller is a Nazi, mass murderer, baby killer' verbiage by Mr. O'Reilly surely can drive one into a state of what we in the legal profession call 'righteous assassination.'"

In a variation of the "twinky defense" (taken by Dan White, the San Francisco supervisor who shot and killed both Harvey Milk and Mayor George Moscone), "righteous assassination" is a defense that claims the defendant was so inundated with a particular ideology that he had very little will to halt his actions. The portrayal of Dr. Tiller by Bill O'Reilly as "Tiller the baby killer" made national headlines simply because Scott Roederer's defense team focused on that particular kind of media coverage and made it part of his motivation.

Described by police as "heavily armed," and equipped with body armor, a rifle, a handgun, and a shotgun, Williams told relatives that he aimed to "start a revolution" by destroying the left-wing Tides Foundation, which he believed was "a socialist conspiracy."on.

A look at the Tides Foundation, doesn't reveal anything remotely sinister. It supports:

The one which Beck has taken particular umbrage with is the Apollo Alliance which helps environmental efforts and was instrumental in passage of the economic recovery bill. Whatever links to socialism it might have would be a bit of a stretch to guess.

Then there's The Story of Stuff, a rather predictable polemic, intended to teach children where all the things that big business and advertising hawk (and we buy) wind up - polluting the earth.

Libertarian and politically conservative critics have described the documentary as misleading and politically liberal; one Montana school board opposed the screening of the film in a biology classroom in a 43 vote. The subsequent public outcry against this decision led to a rewrite of the school board's policy and an award for the teacher who screened the film.

Glenn Beck, host of the Glenn Beck TV program, characterized the video as an "anti-capitalist tale that unfortunately has virtually no facts correct." 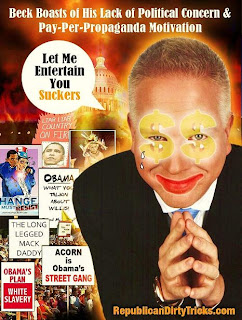 The video has been seen by over 7 million people in 228 countries since 2009. All the facts cited can be viewed here and the original annotated script (with references) can be read here. Yes, it can be seen as an anti-capitalist viewpoint, but it does explicitly get to the heart of the matter: what the average person can do to eliminate all that waste.

So, from a school video about waste production and a program to that helps environmental groups, Glenn Beck has formed an immutable opinion that the Tides Foundation is part of a radical "socialist" agenda and is in a nasty conspiracy to take away our freedoms. How he came up with the statement that the Foundation is amassing an army, I suppose we'll never know.

[Beck] We've also seen it in the classroom. We've shown it to you night after night, kids are being taught to sing about how Obama is wonderful and how everyone is equal in his sight. Kids are being taught that capitalism is evil and flawed through "The Story of Stuff." It's a video made by the George Soros-fundedTides Foundation.

On his radio show on September 24, 2009, Beck elaborated: "The President sees these groups as the vehicle to achieve his goals, because the Founders didn't address redistribution of wealth in the Constitution." But Tides, Beck said, is "behind it all," and "while they do legitimate things, they are also involved in the nasty of the nastiest."

29 episodes denegrating the Tides Foundation. Virtually no mention of the Tides Foundation in other media. One unemployed man on parole living in a fairly remote area with his mother. A mother who keeps a small arsenal of guns and ammunition, believing in a future call-to-arms. The man puts on body armor and subsequently arms himself. The man's targets are the ACLU and the little-known Tides Foundation.

Rev. Dan Vojir is has been writing/blogging on religion and politics for the better part of ten years. A former radio talk show host (Strictly Books €" Talk America Radio Network) and book publisher, Dan has connected with some of the most (more...)
Related Topic(s): ACLU; Bill OReilly; George Soros; Glenn Beck; Media Distortion; Media Network FOXNEWS; Media Right Wing; Media-News; Righteous Assassination; Self-reliance; (more...) Tides Foundation; Tiller-George; Wealth Redistribution Of, Add Tags  (less...)
Add to My Group(s)
Go To Commenting
The views expressed herein are the sole responsibility of the author and do not necessarily reflect those of this website or its editors.