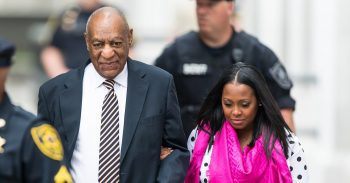 While the world waited impatiently for a phony baloney reality TV star and by-his-own-words-and-behavior admitted sexual predator to have his day in court in Washington, D.C., some 144 miles away, in a courtroom in Norristown, Pa., outside Philadelphia, a real-life, one-time mega TV star stood accused, legally, of being a sexual predator.

Bill Cosby's trial is reality, not TV, but leave it to the purveyors of celebrity "news" on TV to blur the line.

As I got a much-needed haircut and beard removal at a local barber shop, the very loud, obviously impressed with themselves "reporters" on Fox's TMZ informed all within hearing distance (half a block easily if the doors were open) that the Cosby trial opened without the presence of Mrs. Cosby in the courtroom.

It would be so much better for the actor-comedian-accused, they said, if jurors saw Camille, his wife of 53 years, standing by his side as another woman accused her husband of drugging and sexually assaulting her.

The TMZ crew did not mention that the alleged victim was one of some 60 or more women who have said Cosby drugged and then sexually assaulted them over the course of his career. TMZ did note that the TV star was accompanied into court by Keshia Knight Pulliam, who played his youngest daughter, Rudy Huxtable, on the family-friendly Cosby Show for eight years. Better if Papa Huxtable had been accompanied by his four, real-life daughters, TMZ opined, not his TV daughter.

Did I mention that all the reporters on TV who were commenting on how important it might have been for Cosby if the jurors saw the five most important women in his real life -- his wife and daughters -- showing their support for him as he stood accused of three felony charges of aggravated indecent assault, were men?

In a court case involving allegations that a powerful man, using his position and influence to drug and sexually assault a woman, the TV show did not think it necessary to offer at least one woman's opinion on whether or not it would have been good for Cosby if his wife was in court. Not that any woman could speak for Camille Cosby, but I'm willing to bet it might have offered a different perspective.

It also might say something about why, although more than 60 women have said similar things about Cosby, this is the only one to result in criminal charges. Victims in such cases hesitate to come forward publicly with their accusations for fear they will not be believed, but instead, blamed and shamed.

The criminal charges against Cosby are based on allegations by Andrea Constand concerning an incident in January 2004. Her original criminal complaint was not pursued for "lack of evidence." It was revived and filed by a new prosecutor last December just weeks before Pennsylvania's 12-year statute of limitations on sexual assault had expired.

Dozens of other women say Cosby assaulted them, too, the alleged incidents ranging from 1968 to 2008. But in all the other cases, the statute of limitations on filing criminal charges had passed, which is where the shame and blame and fear of not being believed works in favor of the alleged predator, especially, as with Cosby, a famous, powerful male.

Constand, who worked at Temple University, where Cosby, an alumnus, is a legend, filed a civil lawsuit against Cosby in 2005. He settled with her, but the transcript of his disposition was made public. Facing no criminal charges, he acknowledged having what he said was "consensual" sex involving the use of Benadryl and Quaaludes with a series of young women, but only in the 1970s. He further acknowledged that giving the women the drug was illegal.

Are we still wondering about Camille Cosby not being in court to stand by her man?

There were other women in court, though. Three other alleged victims were there to lend public support to Constand and to Kelly Johnson, who was the prosecution's first witness. As with many of the other women, she said that, even though the statute of limitations had passed and Cosby couldn't be criminally charged in her case, she was willing to go public with her story -- even testify in court to it -- once she learned that many other women had the same experience.

Many of the allegations against Cosby, 79, came after 2014, when previously whispered tales of his behavior became wide public knowledge.

Related Topic(s): Bill Cosby; Celebrity; Embarrassment; Evidence; Fear; Juror; Predator; Reality; Sex; Sexual Assault; (more...) Shame; Statute Of Limitations; Television; Testify; Time; Women, Add Tags  (less...)
Add to My Group(s)
Go To Commenting
The views expressed herein are the sole responsibility of the author and do not necessarily reflect those of this website or its editors.