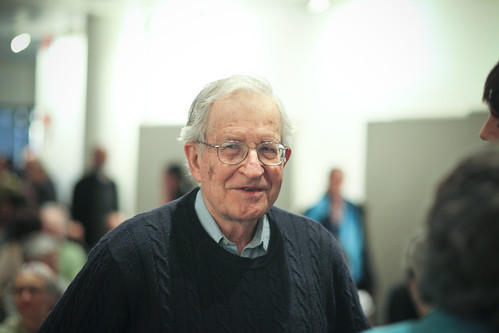 Noam Chomsky
(Image by jeanbaptisteparis)   Details   DMCA
the U.S. left leadership sits in the left chamber of the hall of mirrors, complaining about conspiracy theories while closing its eyes to actual conspiracies crucial to contemporary imperialism."

Graeme MacQueen, Beyond Their Wildest Dreams: September 11, 2001 and the American Left

It is well known that effective propaganda works through slow, imperceptible repetition. "The slow building up of reflexes and myths" is the way Jacques Ellul put it in his classic, Propaganda. This works through commission and omission.

I was reminded of this recently after I published a newspaper editorial on Martin Luther King Day stating the fact that the United States' government assassinated Dr. King. To the best of my knowledge, this was the only newspaper op-ed to say that. I discovered that many newspapers and other publications (with very rare exceptions), despite a plethora of articles and editorials praising King, ignored this "little" fact as if it were inconsequential. No doubt they wish it were, or that it were not true, just as many hoped that repeating the bromide that James Earl Ray killed Dr. King would reinforce the myth they've been selling for fifty years, despite overwhelming evidence to the contrary that is available to anyone wishing to investigate the truth.

The general attitude seemed to be: Let's just appreciate MLK on his birthday and get on with it. Don't be a spoil-sport.

That this is the approach of the mainstream corporate media (MSM) should not be surprising, for they are mouthpieces for official government lies. But when the same position is taken by so many liberal and progressive intellectuals and publications who are otherwise severely critical of the MSM for their propaganda in the service of empire, it gives pause. Like their counterparts in the MSM, these liberals shower King with praise, even adding that he was more than a civil rights leader, that he opposed war and economic exploitation as well, but as to who killed him, and why, and why it matters today, that is elided. Amy Goodman at Democracy Now in a recent piece about an upcoming documentary about King is a case in point. Not once in this long conversation about a film about the last few years of King's life and his commitment to oppose the Vietnam War and launch the Poor People's Campaign is the subject of who killed him and why broached. It is a perfect example of the denial of the truth through omission.

Propaganda, of course comes in many forms: big lies and small; half-truths, whispers, and rumors; slow-drip and headlong; misinformation and disinformation; through commission and omission; intentional and unintentional; cultural and political, etc. Although it is omnipresent today -- 24/7 surround sound -- when it comes from the mouths of government spokespeople or corporate media the average person, grown somewhat suspicious of official lies, has a slight chance of detecting it. This is far more difficult, however, when it takes the form of a left-wing critique of U.S. government policies that subtly supports official explanations through sly innuendos and references, or through omission. Reading an encomium to Dr. King that attacks government positions on race, war, and economics from the left will often get people nodding their heads in agreement while they fail to notice a fatal flaw at the heart of the critique. The Democracy Now piece is a perfect example of this legerdemain.

I do not know the motivations or intentions of many prominent leftist intellectuals and publications, but I do know that many choose to avoid placing certain key historical events at the center of their analyses. In fact, they either avoid them like the plague, dismiss them as inconsequential, or use the CIA's term of choice and call them "conspiracy theories" and their proponents "conspiracy nuts." The result is a powerful propaganda victory for the power elites they say they oppose.

Orwell called it "Crimestop: [it] means the faculty of stopping short, as though by instinct, at the threshold of any dangerous thought. It includes the power of not grasping analogies, of failing to perceive logical errors, of misunderstanding the simplest arguments if they are inimical to Ingsoc, and of being bored or repelled by any train of thought which is capable of leading in a heretical direction. Crimestop, in short means protective stupidity."

There are many fine writers and activists who are very frustrated by their inability, despite a vast and continuous outpouring of excellent critiques of the machinations of the oligarchical rulers of the U.S., to convince people of the ways they have been brainwashed by government/media propaganda. Most of their anger is directed toward the most obvious sources of this intricate psychological warfare directed at the American people. They often fail to realize, however -- or fail to say -- that there are leftists in their ranks who, whether intentionally or not, are far more effective than the recognized enemies in government intelligence agencies and their corporate accomplices in the media in convincing people that the system works and that it is not run by killers who will go to any lengths to achieve their goals. These leftist critics, while often right on specific issues that one can agree with, couch their critiques within a framework that omits or disparages certain truths without which nothing makes sense. By truths I do not mean debatable matters, but key historical events that have been studied and researched extensively by reputable scholars and have been shown to be factual, except to those who fail to fairly do their homework, purposely or through laziness.

There is no way to understand today's world without confronting four key historical events out of which spring today's conditions of oligarchic rule, constant war, and the growth of an intelligence apparatus that makes Orwell's 1984 look so anachronistic.

They are: the assassinations of JFK, MLK, and RFK by elements within the U.S. intelligence services, and the insider attacks of September 11, 2001. These are anathema to a group of very prominent left-wing intellectuals and liberal publications. It is okay for them to attack Bush, Obama, Clinton, Trump, the Democratic Party, Bernie Sanders, liberals in general, creeping fascism, capitalism, the growth of the intelligence state, etc.; but to accept, or even to explore fairly in writing, what I assert as factual above, is verboten. Why?

When President Kennedy was murdered by the CIA, the United States suffered a coup d'e'tat that resulted in years of savage war waged against Vietnam, resulting in millions of Vietnamese deaths and tens of thousands of American soldiers. The murder of JFK in plain sight sent a message in clear and unambiguous terms to every President that followed that you toe the line or else. They have toed the line. The message from the coup planners and executioners was clear: we run the show. They have been running it ever since.

When Martin Luther King declared his opposition to the Vietnam War and joined it to his espousal of a civil rights and an anti-capitalist program, he had to go. So they killed him.

Related Topic(s): Conspiracy; Intellectuals; Leftist; Lies; Propaganda; Truth, Add Tags
Add to My Group(s)
Go To Commenting
The views expressed herein are the sole responsibility of the author and do not necessarily reflect those of this website or its editors.