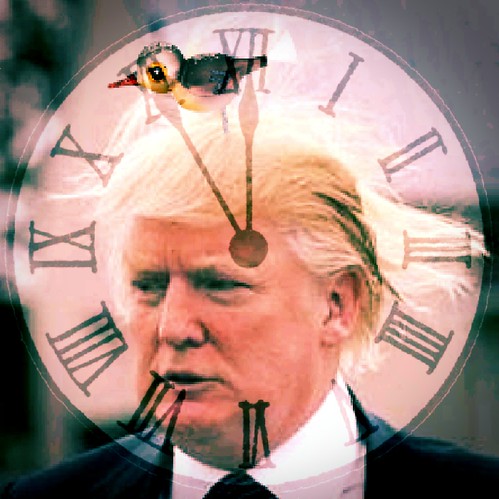 The Democrats' internal debate over whether to begin impeachment should now be over. More than 800 former federal prosecutors, Republicans and Democrats from all over the nation, have signed an open letter saying: "Each of us believes that the conduct of President Trump described in Special Counsel Robert Mueller's report would, in the case of any other person not covered by the Office of Legal Counsel policy against indicting a sitting President, result in multiple felony charges for obstruction of justice."

They are telling us that Donald Trump really is a criminal, but an OLC policy protects him from being indicted and put on trial. With the combined weight of the Mueller report and the prosecutors' letter, we have more justification for calling Trump a criminal than if he had been convicted in an ordinary criminal trial. The President has committed multiple felonies while in office. This is a huge non-partisan fact.

Yet the Democratic leadership still hesitates. Many party elders fear that if Trump is impeached by the House, the Republican majority in the Senate will vote to acquit him, and the failed impeachment process would hurt the Democrats' chances in the 2020 election. These fears are exaggerated.

Although articles of impeachment can be passed by the House on a simple majority, conviction in the Senate requires a supermajority of 67. In the current Senate, 18 Republicans would have to vote for conviction. The conventional wisdom is that no Republican senator would risk the wrath of Trump and the overwhelming majority of GOP voters who support him. Is that so obvious?

The articles of impeachment would not be limited to repeated obstruction of justice. They would also include habitual lying to the American people, and disgracing the office of the presidency (and likely violating election law) by paying for the silence of a porn star with whom he had sex while his wife was pregnant. The articles could cite Trump's abuse of power in overturning 25 denials of security clearance, including those of his daughter and son-in-law. They can accuse him of unethical profiteering by keeping all his business assets in a family-run trust of which he is the sole beneficiary. They can bring up his repeated assaults on the first amendment rights of the press, which he calls the "enemy of the people."

As senators are presented with the arguments for conviction, they and the American public will hear in detail about the sordid behavior of a childish, truculent psychopath who has tried repeatedly to make himself above the law. Will Republican senators be willing to go on record in support of this man? Or will some rediscover the decency they have shed by defending him? Or at least see it as no longer in their interest to be identified with him?

If 18 GOP senators can't do the right thing, then their party will have to justify itself to voters in 2020, and the Democrats can declare war on the Republican Party as a corrupt institution lead by a lawless President. Democrats need to stop thinking of their quarrel with Trump as one more inter-party squabble. His total refusal to cooperate with House investigations, his rejection of subpoenas and refusal to obey the law requiring Treasury to make his tax records available to the House Ways and Means Committee are part of what amounts to an insurrection by the executive against the legislative power of government. "Constitutional crisis" doesn't do justice to the danger Trump poses. He sounds more and more like he's saying "I'm the one with the police and military. Just try to make me obey your laws."

Speaker Pelosi's response to this threat sounds passive and timid. She says plaintively that Trump is "becoming self-impeachable." Actually, Ms. Pelosi, impeaching is what YOU do. Her recipe for dealing with Trump's power-grab is to avoid alienating moderate voters by an impeachment battle and avoiding "some of the other exuberances that exist in our party" [such as Medicare-For-All and the Green New Deal].

She thinks her party has to hunker down and shelter in the center lane. Otherwise, even if Democrats win the presidency in 2020, their victory margin may be insufficient. The New York Times reports that "Ms. Pelosi has told associates that she does not automatically trust the president to respect the results of any election short of an overwhelming defeat." Her formula for dealing with this bully is to shelter in place. This is what passes for leadership in the Democratic party.

What the Democrats need now if they are to prevail against Trump is a combination of courage and anger. The party's establishment is very afraid of losing in 2020, and cringes at the prospect of Trump's school-yard name-calling and crude boasts. Courage, as Aristotle long ago explained, is a matter of harmonizing your feelings with the objective situation. Fear is a rational feeling when it lets us appreciate a real danger, and it becomes courage when we act to remove the danger. When doing so requires a fight, then we need the feeling of anger to get us to do the right thing.

Pelosi and company are wallowing in fear and stuck within a narrow calculus of what will hurt them least. They need passion and a faith that if they act to expose Trump in a public trial, enough Americans, including Republicans, will respect their courage and share their anger at this very bad man who degrades their government. Appeasing Trump by hinting that they are open to some bipartisan agreement on infrastructure merely encourages the worst in him. For now, it needs to be war against Trump and his overweening executive power.

Related Topic(s): Anger; Appeasement; Bipartisan; Courage; Crisis; Democratic; Democrats; Democrats Progressive; Fear; Impeachment; (more...) Moderate; Presidency; President; Psychopath; Republican, Add Tags  (less...)
Add to My Group(s)
Go To Commenting
The views expressed herein are the sole responsibility of the author and do not necessarily reflect those of this website or its editors.