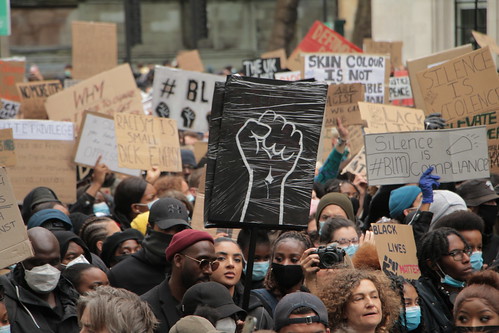 Democrats Will Never Choose Transformative Change - So Give Them No Choice

An existential political crisis for the racial capitalist order will only happen when the left puts forward a viable political alternative.

"There is no political crisis for the ruling order, unless ending their rule is on the agenda of significant social forces."

The Covid-19 epidemic proved beyond all rational doubt that decades of bipartisan privatization and austerity had destroyed the U.S. "public" health care system, rendering the nation structurally incapable of coping with the viral onslaught. The late and geographically uneven lockdown succeeded only in creating Great Depression levels of unemployment without halting the spread of the disease, which has now devoured over 133,000 lives, with Blacks and Native Americans succumbing at five times the rate of whites, and Hispanic Americans dying at four times the frequency of whites. While home to only four percent of the Earth's population, the United States accounts for 25 percent of the global coronavirus death toll- a proportion that precisely matches the U.S. share of the global prison population, with the result that U.S. prisons, packed with Black, red and brown inmates, are by far the biggest Covid-19 hotspots on the planet.

The nation that claims exceptional national - imperial! -- rights and privileges is exceptionally sick, gasping for air but still issuing threats and sanctions against much of the rest of humanity. The raging U.S. health and economic crises are vastly exacerbated by the ruling class's four years-long, self-inflicted crisis of legitimacy, with one faction of the corporate oligarchy raving endlessly that the sitting U.S. president is a dupe of a foreign power. On top of that imagined illegitimacy, is the real failure of U.S. rulers to protect the population from a contagious disease that killed less than 5,000 people in China, its country of origin with a population of 1.4 billion, and which is abating in all the developed nations of the world. A state that cannot safeguard the lives of its citizens has failed a basic test of legitimacy.

In that sense, the U.S. state has never been legitimate for Black America. This chronic, historical condition became acute with the very public murder of George Floyd by Minneapolis cops on May 25. The monthlong outpouring of mass rage spread to every state and U.S. territorial possession and sparked demonstrations around the world in solidarity with U.S. Blacks.

"A state that cannot safeguard the lives of its citizens has failed a basic test of legitimacy."

The scale of protest rivaled the tumultuous Sixties, but most remarkable was the scope of the public political transformation. "Black Lives Matter," the premier slogan and movement of Black militancy, was at the center of what the New York Times called "the largest movement in the country's history." Even more amazingly, a Pew Research poll showed that two-thirds of Americans supported "the Black Lives Matter movement" and other polls confirmed that slim majorities of whites now believe that police are "generally more likely to treat black people unfairly than to mistreat white people." For the first time in U.S. polling history, whites recognized that cops, the coercive forces of the state, systemically mistreat Black people.

In the US of A, where the Warrior Cop was invented to suppress, contain and mass incarcerate Black, brown and red people, that qualifies as a public perception sea change. However, these combined and overlapping crises - economic, public health, political legitimacy, and criminal justice - do not amount to an existential political crisis for the racial capitalist order, because there does not yet exist a viable political alternative. The corporate duopoly still rules, no matter how many people go to the polls in November, and no matter what happens in the interim in the streets.

"The Warrior Cop was invented to suppress, contain and mass incarcerate Black, brown and red people."

Racial capitalism has undergone many crises, in the U.S. and globally, and outlived them. As a political economy, it is in its late stage, moribund and incapable of reversing its accelerating decline. But its ruling classes - even when catastrophically split and behaving self-destructively, as has been the case for the past four years - are not the least bit threatened with loss of power, much less their heads. Indeed, no significant social forces are even proposing to nationalize the banks, or to socialize any significant sectors of the economy. And even much of "Black Lives Matter" (the actual organization, with 14 chapters in the U.S.) has failed to actively support community control of the police, the only proposal that puts popular security in the hands of the people, not the agents of white supremacy and the corporate duopoly. That's how we make the streets of our communities safe for organizing.

There is no political crisis for the ruling order, unless ending that rule is on the agenda of significant social forces. Yet Black people, the (now recognized) leading edge of the current upheaval and the most left-leaning, peace-loving, socialist-minded constituency in the nation, remain locked in the lethal embrace of the corporate duopoly through the Democratic Party, which is hegemonic in Black America.

Three-quarters of the 50 Black full-voting members of the U.S. House ought to be on Black Lives Matters' sh*t list (the organization's and the wider movement's) as Class A Enemies of the People, based on their votes for the 2018 legislation that made cops a protected class and assault on police a federal hate crime. Black Democrats have for nearly half a century been the hands-on managers of mass Black incarceration, gentrification and austerity in Black America. They don't give a damn about Africa, including the slaughter of six million Congolese at the hands of U.S. client regimes - the worst genocide since World War Two. They stand (or kneel) with Nancy Pelosi, who keeps the nation and world safe for the oligarchy.

"Black Democrats have been the hands-on managers of mass Black incarceration, gentrification and austerity in Black America."

Joe Biden is a proud architect of mass Black incarceration, a friend and ally of segregationist politicians, and a warmonger of the lowest type who has promised to veto Medicare for All. No one in Congress is more loyal to the corporate class. But Angela Davis, an icon of the movement for prison abolition who also supports community control of the police, endorsed Biden. "I don't see this election as being about choosing a candidate who will be able to lead us in the right direction," said professor emeritus Davis. "It will be about choosing a candidate who can be most effectively pressured into allowing more space for the evolving anti-racist movement."

Davis' endorsement of the Democrat is consistent with Communist Party USA politics over the decades, even when they ran their own candidates for president and vice president. (Davis occupied the party's VP slot in 1980 and '84.) Back in 2012, Davis endorsed Barack Obama for a second term, shortly after the First Black President destroyed Libya, invaded much of the rest of Africa, made common cause with al Qaida in Syria and was busy attempting to reach a "grand bargain" with the Republicans on austerity. Davis told a conference on "empowering women of color" that Obama "identifies with the Black radical tradition" - a nonsensical statement that artificially grafted Obama into "a place he not only does not belong, but most profoundly does not want to be," as I wrote at the time.

"No one in Congress is more loyal to the corporate class than Biden."

This time around Davis puts political lipstick on the rightwing pig, Biden, who she says "is far more likely to take mass demands seriously" than President Trump. What does that mean? Biden had already rejected defunding of police - Black Lives Matter's top demand. But Biden and the rest of the corporate Democrats do take Black demands seriously. It is their job, not white Republicans like Trump, to listen to the demands of the party's most loyal constituency -- and then gut them. Davis and other radicals that endorse corporate Democrats legitimize the charade, and thus are far more useful to the Democrats than the Democrats are useful to the movement.

In Black America, radical politics has always been quite popular, and not just with the youth. The job of Black Democrats' is to make radical politics appear idealistic but impractical. It's alright to shout righteous demands in the street, but serious politics must be vetted by the Democrats to be acceptable. The truth is that transforming the police from defenders of capital and white privilege to facilitators of the Black community's security needs will only happen when the rulers conclude that it is more costly to reject our demands than to accept them.

We must not wait on capitalist crises to further devastate our communities. Rather, the movement must create a political crisis for the ruling oligarchy by agitating to actually end their rule.

BAR executive editor Glen Ford can be contacted at Glen.Ford@BlackAgendaReport.com

Related Topic(s): Austerity; Class; Democrats; Election; Genocide; Politics, Add Tags
Add to My Group(s)
Go To Commenting
The views expressed herein are the sole responsibility of the author and do not necessarily reflect those of this website or its editors.